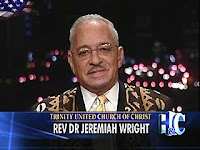 Rev. Wright in a different light

By William A. Von Hoene Jr.

During the last two weeks, excerpts from sermons of the Rev. Jeremiah Wright Jr., pastor for more than 35 years at Trinity United Church of Christ on Chicago’s South Side, have flooded the airwaves and dominated our discourse about the presidential campaign and race. Wright has been depicted as a racial extremist, or just a plain racist. A number of political figures and news commentators have attempted to use Sen. Barack Obama’s association with him to call into question Obama’s judgment and the sincerity of his commitment to unity.

I have been a member of Trinity, a church with an almost entirely African-American congregation, for more than 25 years. I am, however, a white male. From a decidedly different perspective than most Trinitarians, I have heard Wright preach about racial inequality many times, in unvarnished and passionate terms.

In Obama’s recent speech in Philadelphia on racial issues confronting our nation, the senator eloquently observed that Rev. Wright’s sermons reflect the difficult experiences and frustrations of a generation.

It is important that we understand the dynamic Obama spoke about.

It also is important that we not let media coverage and political gamesmanship isolate selected remarks by Wright to the exclusion of anything else that might define him more accurately and completely.

I find it very troubling that we have distilled Wright’s 35-year ministry to a few phrases; no context whatsoever has been offered or explored.

I do have a bit of personal context. About 26 years ago, I became engaged to my wife, an African-American. She was at that time and remains a member of Trinity. Somewhere between the ring and the altar, my wife had second thoughts and broke off the engagement. Her decision was grounded in race: So committed to black causes, the daughter of parents subjected to unthinkable prejudice over the years, an “up-and-coming” leader in the young black community, how could she marry a white man?

Rev. Wright, whom I had met only in passing at the time and who was equally if not more outspoken about “black” issues than he is today, somehow found out about my wife’s decision. He called and asked her to “drop everything” and meet with him at Trinity. He spent four hours explaining his reaction to her decision. Racial divisions were unacceptable, he said, no matter how great or prolonged the pain that caused them. God would not want us to assess or make decisions about people based on race. The world could make progress on issues of race only if people were prepared to break down barriers that were much easier to let stand.

Rev. Wright was pretty persuasive; he presided over our wedding a few months later. In the years since, I have watched in utter awe as Wright has overseen and constructed a support system for thousands in need on the South Side that is far more impressive and effective than any governmental program possibly could approach. And never in my life have I been welcomed more warmly and sincerely than at Trinity. Never.

I hope that as a nation, we take advantage of the opportunity the recent focus on Rev. Wright presents—to advance our dialogue on race in a meaningful and unprecedented way. To do so, however, we need to appreciate that passion born of difficulty does not always manifest itself in the kind of words with which we are most comfortable. We also need to recognize that the basic goodness of people like Jeremiah Wright is not always packaged conventionally.

The problems of race confronting us are immense. But if we sensationalize isolated words for political advantage, casting aside the depth of feeling, circumstances and context which inform them, those problems not only will remain immense, they will be insoluble.

William A. Von Hoene Jr. of Chicago is a member of Trinity United Church of Christ.
Posted by HighJive at 9:33 AM

The isolation of those few words has been inexusable - as has the replaying of them ad-nauseum by certain shitheads. I've listened to the enitre "Chickens Come Home to Roost" sermon and it is an eloquent plea for America to wake the fuck up, delivered in a loving and (for the most part) even tone.

It would be a good thing if every white man experienced the love and power of the Black Church - starting with Sean Hannity.

I've seen the whole speech on YT. Know some Trinity members. it's a cool church.

Sean Hannity's head would spin around in a circle and he'd spit up pea soup if he were in that church more than 30 seconds.


Bill O'Reilly would have an aneurism if he were there.

If Lou Dobbs came, he would turn red and yell "i know you're hiding mexicans here somewhere!"

If Anne Coulter stopped by, would get punched in the mouth for insulting everyone.

If Bill Clinton visited, he would be reminded that he's never been a black president.

And Hilary Clinton would figure out a way to add Trotter's goodwill to her resume.