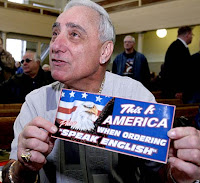 From The Associated Press…

PHILADELPHIA — The owner of a famous cheesesteak shop did not discriminate when he posted signs asking customers to speak English, a city panel ruled Wednesday.

In a 2-1 vote, a Commission on Human Relations panel found that two signs at Geno’s Steaks telling customers, “This is America: WHEN ORDERING ‘PLEASE SPEAK ENGLISH,’” do not violate the city’s Fair Practices Ordinance.

Shop owner Joe Vento has said he posted the signs in October 2005 because of concerns over immigration reform and an increasing number of people in the area who could not order in English.

Vento has said he never refused service to anyone because they couldn’t speak English. But critics argued that the signs discourage customers of certain backgrounds from eating at the shop.

Commissioners Roxanne E. Covington and Burt Siegel voted to dismiss the complaint, finding that the sign does not communicate that business will be “refused, withheld or denied.”

In a dissenting opinion, Commissioner Joseph J. Centeno said he thought the signs did discourage some customers.

“The sign appeared immediately above another sign that had the following words: ‘Management Reserves the Right to Refuse Service,’” Centeno wrote.

Geno’s and its chief rival across the street, Pat’s King of Steaks, are two of the city’s best known cheesesteak venues. A growing number of Asian and Latin American immigrants have moved into the traditionally Italian neighborhood in recent years.

Vento had threatened to go to court if he lost. His attorney, Albert G. Weiss, said he was “pleasantly surprised” by Wednesday’s decision.

“We expected that this was not going to go our way,” Weiss said.

In February 2007, the commission found probable cause against Geno’s for discrimination, alleging that the policy discourages customers of certain backgrounds from eating there.

The case went to a public hearing, where an attorney for the commission argued that the sign was about intimidation, not political speech. The matter then went to the three-member panel for a ruling.

W. Nick Taliaferro, the commission’s executive director, said he would not appeal.
Posted by HighJive at 1:31 PM