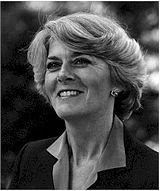 Ferraro fails to grasp why she’s so wrong
Obama’s appeal not about race, but how he transcends it

Geraldine Ferraro still doesn’t get it. On Wednesday, Ferraro was forced to resign from Sen. Hillary Clinton’s finance committee after remarks she made about Sen. Barack Obama were widely interpreted as being racist.

Although the fallout from those remarks forced Ferraro to publicly distance herself from the Clinton campaign, she is sticking by them.

Ferraro, who was the Democratic vice presidential nominee in 1984, told ABC’s “Good Morning America” that she is “absolutely not” sorry for saying Obama was benefitting from his race in this contest.

Indeed, Ferraro said she is “hurt” that her comments are being spun by the Obama campaign as being racist.

And you know what, I believe her.

I don’t think Ferraro has a clue that she is thinking like an Archie Bunker bigot.

First of all, although Obama looks like a light-skinned African American, is married to a black woman and has fathered two brown-skinned daughters -- he is biracial.

Obama’s mother was a white woman from Kansas and his father was an African from Kenya. Further, he was raised in a household that included his white grandparents, and didn’t meet the black half of his family until he was an adult.

Putting feminism above all

It is precisely this unusual multiracial background, including spending some of his formative years in Indonesia, that has given him a leg up in this campaign -- not his skin color.

Quiet as kept, if being black is the magic ingredient for a successful “historic” campaign, then Shirley Chisholm, Jesse Jackson, Al Sharpton, Carol Moseley Braun and Dick Gregory would have been able to pull together a lot more than token votes.

A lot of black people didn’t see Obama as being a serious contender for the presidency until masses of white people voted for him in Iowa.

Rather than luck, it has been Obama’s ability to relate to people from diverse backgrounds that has made him a dream candidate for the Democrats.

But instead of giving Obama his props, Ferraro painted him as a novel black candidate.

Under fire for her remarks, Ferraro is blaming the Obama campaign and argues that she has a record of defending civil rights.

By that I suppose Ferraro means that she helped pass legislation that improved the quality of life for African Americans,

I guess it never dawned on her that she was elected to serve everyone in her district -- including blacks, and wasn’t doing them any special favors.

Ferraro’s remarks show how far liberal feminists are willing to go to put another Clinton into the White House.

Unfortunately, Clinton has failed to show any leadership in this area.

She couldn’t keep her husband, Bill, from resorting to racial innuendo when she was fighting in South Carolina. And instead of distancing herself from Pennsylvania’s Gov. Ed Rendell, who candidly told a newspaper that whites in his state were “conservative” (in this case a code word for racist) and would not vote for Obama, Clinton has embraced Rendell’s support.

Clinton, who started off wooing the black vote, is now tolerating her supporters’ bigotry.

Indeed, an unrepentant Ferraro told reporters that Clinton couldn’t “rein” her in, and Clinton failed to send a message to voters about why Ferraro’s comments were inappropriate.

Yes. On the campaign trail Tuesday, Clinton told the Associated Press that she did not agree with Ferraro.

“It is regrettable that any of our supporters -- on both sides, because we both have this experience -- say things that kind of veer off into the personal,” she said. But Clinton missed the point.

In passing up the opportunity to not only reject Ferraro’s narrow-mindedness, Clinton passed up the chance to send a definitive message to her supporters that there’s no place for race-baiting in the Democratic primary.

Clinton made the same mistake when she was confronted with Rendell’s racially divisive comments.

Instead of gaffes, these racial comments are beginning to look like a Clinton strategy.
Posted by HighJive at 7:32 AM

She should have just hired some of her husband's "business associates" to bury him under the 50 yd line at the Meadowlands.