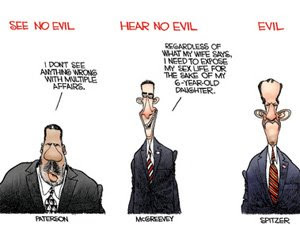 • The New York Daily News reported that New York Governor David Paterson did use campaign funds for personal expenses, although he reimbursed his campaign—but a few of the reimbursements happened this week after the news surfaced. The charges included over $1,000 spent in 2004 at the Men’s Wearhouse. George Zimmer would probably insist he’s unaware of any wrongdoing and declare, “You’re going to like the way you look—I guarantee it.”

• Circuit City is getting booted off the Standard & Poor’s 500 index, as the retailer is expected to report 4Q losses next month. The electronics seller has failed to produce a quarterly profit since August 2006. George Zimmer would probably tell Circuit City accountants, “You’re not going to like the way you look—I guarantee it.”
Posted by HighJive at 10:42 AM