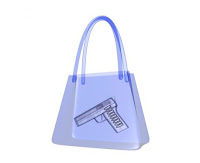 Quick Shots in a MultiCultClassics Monologue…

• The lawyer for Remy Ma argued in court that his client did not own the gun used to shoot a woman in the stomach; plus, the gun went off by accident. The opposing lawyer countered that the rapper did all the stuff necessary to intentionally shoot, including loading the pistol with hollow-point bullets, racking the slide, aiming at the victim and squeezing the trigger. Looks like the CSI:NY team won’t be needed to solve this caper.

• Now New York Governor David Paterson admits he used pot and cocaine in his 20s. At this point, the man has done everything except shoot people with Remy Ma.

• Detroit Mayor Kwame Kilpatrick was charged with perjury and other misdeeds on Monday; however, he refuses to step down. Kilpatrick announced, “I look forward to complete exoneration once all the facts have been brought forth. I will remain focused on moving this city forward.” Kilpatrick’s next moves include campaigning to become the Governor of New York.

• Clinton advisor James Carville refused to apologize for comparing Governor Bill Richardson to Judas. Speaking to The New York Times after Richardson endorsed Barack Obama, Carville quipped, “Mr. Richardson’s endorsement came right around the anniversary of the day when Judas sold out (Jesus) for 30 pieces of silver, so I think the timing is appropriate, if ironic.” Jesus probably denies knowing any of these fools. Judas too.
Posted by HighJive at 7:00 PM