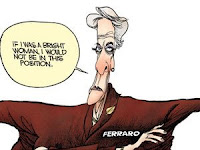 The controversial, race-based comments of former vice presidential candidate Geraldine Ferraro and of retired South Side pastor Rev. Jeremiah Wright Jr. are of genuine importance to the selection of a Democratic presidential nominee. Although not for the reasons that have unduly exercised many U.S. voters in recent days.

Ferraro, who until her resignation Wednesday was a member of Sen. Hillary Clinton's finance committee, has been on a griddle for asserting that Sen. Barack Obama benefits from de facto affirmative action. “If Obama was a white man, he would not be in this position,” Ferraro told a California newspaper. “And if he was a woman of any color, he would not be in this position. He happens to be very lucky to be who he is. And the country is caught up in the concept.”

Wright, whom Obama has embraced as a spiritual mentor, in February delivered his final sermon as pastor of Obama’s congregation at Trinity United Church of Christ. “How many children of biracial parents can make it in a world controlled by racist ideology?” he asked. “Children born to parents who are of two different races do not have a snowball’s chance in hell of making it in America, especially if the momma was white and the daddy was black. A child born to that union is an unfortunate statistic in a racially polarized society. But, if you use your mind, instead of a lost statistic in a hate-filled universe, you just may end up a law student at Harvard University. …”

Ferraro was a newcomer to discussions of race in the 2008 campaign; Wright’s remarks have peppered this cycle, his strong words inducing cringes in some listeners and Afrocentric pride in others. Columnists and talking heads have parsed Ferraro’s and Wright’s comments, variously defending their candor or demanding that the candidates they support prostrate themselves in apology for their racially oriented words.

Which strikes us as somewhere along the continuum from peculiar to bizarre.

Yes, we’re electing a president, and what he or she thinks about race is both important and fair game to opponents. But neither Gerry Ferraro nor Rev. Wright will be on any ballot. They’re a couple of talkers enjoying their 1st Amendment rights.

No one with more than a springer spaniel’s political awareness thinks that Ferraro speaks for Clinton, or that Wright speaks for Obama. Demands from one candidate’s supporters that the other repudiate what was said on his or her behalf ring disingenuous.

Ferraro and Wright are useful distractions. They create crucible moments. We should be grateful for their provocations.

Americans like to complain about the length of presidential campaigns. But by one measure long campaigns are a godsend. We have time to see how the candidates react when the crucible overheats -- to judge how they handle moments of crises large and small.

For his part, No-Drama Obama has been playing the Ferraro comment with appropriate cool. “If you pulled out a handbook of how to weigh your assets and liabilities in a presidential race,” he said Wednesday in Chicago, “I don’t think my name or my skin color would be in the asset column.”

That said, Obama surely realizes that if his bouillabaisse ethnicity troubles some voters, it also attracts others -- of all races. It’s telling that Obama got his first January boost in the mostly white state of Iowa, a win with the ironic effect of making him palatable to some African-Americans elsewhere who had doubted that a black man could have transracial appeal.

Clinton, by contrast, has been clumsier. A wry synthesis of her nervous reaction comes from Politico pundit Roger Simon: “Asked for her reaction to Ferraro’s comment, Clinton at first said: ‘Well, I don’t agree with that, and I think it’s important that we try to stay focused on issues that matter to the American people.’ … Later, as the furor built, Clinton added: ‘I obviously disagree and reject the comments.’ (Which is just shy of Clinton’s gold standard of ‘reject and denounce,’ which is what she demanded of Obama regarding Louis Farrakhan’s support.)”

Wednesday night, addressing a group of black newspaper publishers, Clinton finally achieved that gold standard in apologizing -- and apologizing -- for Ferraro’s far-from-racist remark: “I certainly do repudiate it, and I regret deeply that it was said. Obviously [Ferraro] doesn’t speak for the campaign, she doesn’t speak for any of my positions, and she has resigned from being a member of my very large finance committee.”

OK, everybody clear on that? Clinton opposes whatever anyone, anywhere, might find offensive.

The unexpectedly long tussle for the Democratic nomination is draining for the participants. In that spirit, yes, let’s study how the candidates respond to difficult moments. In the Ferraro case, the candidate who could have taken offense didn’t. And the candidate whose supporter started it all found herself buffeted rather than taking charge.

Going forward: Yes, Hillary Clinton and Barack Obama are responsible for every word they utter. But let’s not use every controversial comment from either candidate’s supporters to take personal offense. Instead we can listen, watch -- and learn.
Posted by HighJive at 10:40 AM