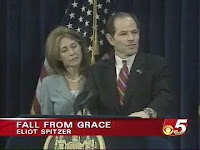 Don’t drag your wife into your mess. Be. A. Man.

By Katha Pollitt, a columnist for The Nation magazine

Just once I’d like to see a male politician caught in a sex scandal stand up there at the news conference all by himself. You want to be an alpha male with extra helpings of testosterone and appetites that cannot be denied? Fine, but if you get caught, Be. A. Man. Don’t drag your wife in front of the cameras to prove how strong your marriage is. Practice saying these words: “No, darling, I could never live with myself if I let you humiliate yourself in public to help my career. I know people always want to blame the wife, but this is all my fault. Besides, I don’t want our children to think marriage means wives have to put up with their husband’s crap – that’s what prostitutes are for! No, wait…”

Silda Wall Spitzer looked so sad and stricken standing next to her husband, then-New York Gov. Eliot Spitzer, as he issued a brief statement apologizing to his “family” and “the public” -- in effect acknowledging the truth of revelations that he was Client 9, who had paid a prostitution ring called the Emperors Club VIP for (very expensive) sex. Has nothing changed since 1969, when poor Joan Kennedy faced reporters with Ted after Chappaquiddick? In just the last decade we’ve had, among others, Suzanne Craig, Wendy Vitter, Dina McGreevey -- and, of course, Hillary Clinton. I’m not saying the wife has to divorce her ethically challenged spouse. But just once I’d like to see her skip the news conference and fly off to Paris instead.

People may use words like “stoic” and “dignified” to describe the stand-by-your-man act, but really what they’re thinking is either “doormat” or “enabler.” (Dr. Laura Schlessinger, on the “Today” show, to a startled co-host Meredith Vieira: “When the wife does not focus in on the needs and the feelings sexually, personally, to make him feel like a man, to make him feel like a success, to make him feel like her hero, he’s very susceptible to the charm of some other woman making him feel what he needs. And these days, women don’t spend a lot of time thinking about how they can give their men what they need.” This of Silda Spitzer, who gave up her career to facilitate her husband’s political ambitions! If the New York Post is correct that his use of prostitutes goes back 10 years, he started when his wife was raising three small children -- nice.)

With Silda’s ashen face still vividly in the public mind, this might not be the best moment for male bon vivants like Alan Dershowitz and Bill Maher to pooh-pooh prostitution as a trivial private matter that no one really cares about – it’s just how men are. And probably I would be more sympathetic another time to the notion, expressed by some young feminists and professional sex workers, that the real victim of this scandal is “Kristen.”

Some have described Spitzer’s fall as Shakespearean, but the character he most resembles is not a tragic hero like Lear or Macbeth; it’s the puritanical zealot Angelo from “Measure for Measure,” who sets out to enforce Vienna’s long-disused death penalty for extramarital sex:

You may not so extenuate his offence,

For I have had such faults; but rather tell me,

When I, that censure him, do so offend,

Let mine own judgment pattern out my death,

And nothing come in partial. Sir, he must die.

Angelo is a lustful hypocrite, far worse than the trollops and roisterers and young lovers he condemns, and he’s eventually caught in a sting. Since the play is a comedy, his only punishment is loss of office, and marriage to the woman he jilted and who loves him despite all.

Spitzer could do a lot worse.

Meanwhile, his downfall means joy on Wall Street and, no doubt, satisfaction in the White House too -- another Democratic pol brought low, whether or not through Republican skulduggery, as some suspect. Hillary Clinton loses a superdelegate but perhaps picks up some votes from women fed up with male politicians. And there’s a promotion for Lt. Gov. David Paterson, a well-liked liberal Democrat who’s not only black but legally blind. Only in America!
Posted by HighJive at 8:16 AM