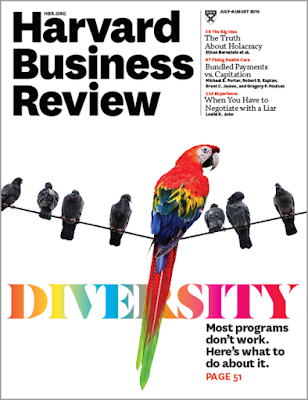 The July-August 2016 issue of Harvard Business Review featured “Diversity” as its cover headline; plus, the accompanying subhead declared, “Most programs don’t work. Here’s what to do about it.” The publication ultimately—albeit unintentionally—showed exactly why diversity doesn’t work, especially in the advertising industry.

The diversity-related articles provided data to state that stereotypical tactics fail to foster change. Of course, the advertising industry has plenty of evidence to corroborate HBR’s findings. For example, forcing the ruling majority to attend diversity training and unconscious bias seminars inspires resentment versus revolution. Performance ratings get bad reviews. Grievance hotlines usually result in pissing off employees. On the flip side, the tactics deemed successful in most industries—including college recruitment, mentoring and diversity committees—have bombed on Madison Avenue. Has its long history of embracing exclusivity made adland inclusivity-proof?

Surprisingly, HBR saluted Coca-Cola as a diversity leader. The publication is seemingly oblivious to the hypocrisy of an allegedly progressive client conspiring with White advertising agencies where diversity remains a dream deferred, delegated and denied for decades. At some point, advertisers like Coke must stop settling for diversity supplier programs and start considering the diversity of suppliers—especially the White shops supplying branded marketing messages.

To top it all off—and relate matters directly to the advertising industry—the HBR issue also presented a self-absorbed piece by WPP Overlord Sir Martin Sorrell. The overpaid odious little jerk revealed how he erected a multi-billion-dollar dinosaur, emphasizing the imperative for cultivating and retaining talent. While Sorrell managed to mention diverted diversity directives to promote White women, he offered no insights regarding true diversity. For WPP—as well as its White holding company peers—true diversity is never part of the business plan.

If Harvard Business Review really wants a classic case study for failed diversity programs, the publication should review the business on Madison Avenue.

NO programs work in the ad sector. That's why the black Creative Director needle has been stuck on 1% and sliding downhill in the last few years.

Ad agencies, and in particular holding companies, are filled with a lot of the following, not a single one of which have ever actually led to a sea change (or hell, a drop in the ocean) of color getting hired. Just lots of white women getting hired, good press and investors and the NYC Commission on Human Rights off their backs come annual report time:

Internships for teenagers of color

Paying Adcolor Board of Director salaries, who then conveniently give diversity awards to the sponsoring holding company's ad agencies

"Blind Screening Process" that only applies to the initial intake of resumes for non-creative, entry-level positions

Sponsoring and promoting the 3% Conference

Hey good news! A trio of white women who’ve never shown any interest or progress in addressing ethnic diversity inside advertising HAVE TOTALLY COME UP WITH A SOLUTION TO FIX DIVERSITY!

You just have to pay to hire them at your own agency, you get their special  Beyond Bias™ training and WOW….

(Ethnic issues to be addressed at some much later date after Gender Diversity and Diversity of Thought get tackled first, of course).