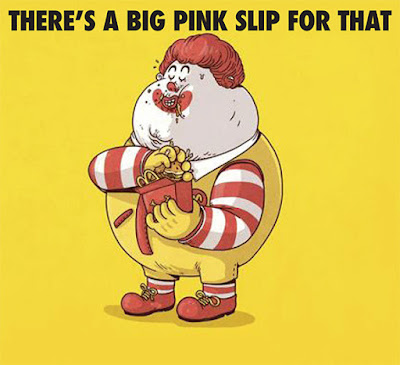 Advertising Age reported Mickey D’s replaced top executives including McDonald’s U.S. Chief Marketing Officer Deborah Wahl, who now won’t be around to experience the awesome power of We Are Unlimited. The Omnicom-fabricated “Agency of the Future” probably isn’t worried, despite having produced the worst campaign in the fast feeder’s recent history. After all, Wahl’s replacement—Morgan Flatley—comes from PepsiCo, which has obsessive ties to the holding company. Hell, We Are Unlimited will likely pick up the Propel Zero account before long.

Wahl Out as McDonald’s U.S. CMO, Replaced by PepsiCo’s Flatley

McDonald’s U.S. Chief Marketing Officer Deborah Wahl and two other U.S. executives are being replaced at the Golden Arches, with PepsiCo’s Morgan Flatley being named to the top U.S. marketer spot. Ms. Wahl is out after three years at McDonald’s. She joined in 2014.

The changes, announced Tuesday night, come after Chris Kempczinski was promoted to president of McDonald’s U.S., effective Jan. 1. Along with the U.S. CMO shakeup, Farhan Siddiqi was promoted to the role of head of U.S. digital and Starbucks VP Linda VanGosen is being brought in as McDonald’s head of U.S. menu. All three are set to begin their new roles this month, McDonald’s said.

Ms. Wahl, who helped the chain bounce back from a prolonged sales slump with marketing for All Day Breakfast, also led the selection and creation of a new dedicated creative agency for McDonald’s U.S. business, We Are Unlimited, last year. She could not be immediately reached for comment.

Ms. Flatley, who had been chief marketing officer for PepsiCo-owned Gatorade and Propel, in late summer took on a new role of CMO for the global nutrition group and senior VP-global grains. She had been in various roles at PepsiCo over more than a decade and is most closely associated with her work on the Gatorade business. Before joining PepsiCo, Ms. Flatley handled work on Tide and Tylenol while at Saatchi & Saatchi.

“This is an exciting time for McDonald’s as we continue to raise the bar on how we prepare and source our food, offer our customers more modern experiences and redefine convenience through new initiatives like delivery and mobile ordering and pay,” Mr. Kempczinski said in a statement. “I am confident these new team members will help McDonald’s only accelerate the already great progress we have made in the U.S.”

Ms. Flatley takes over as McDonald’s top U.S. marketing executive at a critical time. McDonald’s, which recently said it would use fresh beef to prepare its signature Quarter Pounder sandwich in most restaurants, needs to find ways to attract customers and hold onto them. Other changes it is making include plans to introduce mobile order and pay nationwide later this year. Such tweaks come as comparable guest counts, or the number of transactions at longstanding restaurants, have fallen for four years in a row. And U.S. same-store sales fell 1.3% in the fourth quarter after four consecutive quarters of growth, which had stemmed in large part from the introduction of All Day Breakfast.

“We want to thank Morgan for her many contributions to PepsiCo over the years,” PepsiCo said of Ms. Flatley. “PepsiCo is renowned for developing a deep bench of talent, not only within our company, but within the industry as a whole, and Morgan’s appointment at McDonald’s continues that tradition.”

Mr. Siddiqi is the only one of the three executives appointed Tuesday who has been at McDonald’s. He joined the Golden Arches in 2016 and was VP-global digital experience, overseeing digital areas including global product strategy, design, innovation and business development. Now, he will add responsibility “for delivering and managing digital solutions for the U.S. that increase customer engagement and drive sales through digital channels,” McDonald’s said.

Ms. VanGosen joined Starbucks in 2014 and was its VP overseeing Starbucks Evenings, that chain’s effort to enhance the experience at its stores in later hours including with wine and beer at some locations. Prior to Starbucks, she was VP of brand strategy, insights and menu innovation at TGI Friday’s and was VP of product innovation at Chili’s Grill & Bar.