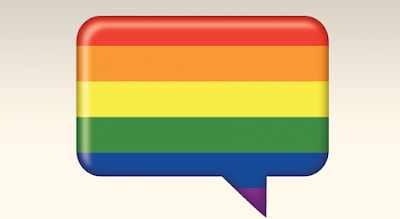 The teenage years are rarely easy, and that’s especially true for those of us in the lesbian, gay, bisexual and transgender (LGBT) community.

When I was growing up in the Midwest, I had a passion for business. However, there were very few LGBT role models I could look up to in corporate America. I knew that when I started my own career, I wanted to find a job where I could be the same person at work that I was at home; yet, I wasn’t sure if such a job existed.

Finding that job took a lot of perseverance. After graduating from college, I moved to Los Angeles and started my career in entertainment because I thought it would be the most accepting environment. However, even in that industry, which is known to be more LGBT-friendly than most, it was a struggle to find a job where I could be entirely open about my life without any fear of discrimination.

When I did eventually find a job that made me feel truly comfortable, at in-image advertising pioneer GumGum, my world opened and everything changed. The more relaxed I felt about my LGBT identity in the office, the happier I felt in general and the better I performed at work. I found myself quickly climbing the corporate ladder, and I’m now GumGum’s president and COO, where I have the great pleasure of leading a thriving company.

I share this story not because of my personal success, but rather because I could not have succeeded in this way in a company that was not committed to LGBT equality. That’s why I have mixed feelings about the 2016 edition of the Human Rights Campaign Foundation’s Corporate Equality Index (CEI), which set a new record for the number of businesses that earned a top score of 100 percent in equality. While it is remarkable that the CEI set a new record for truly inclusive companies, that record-breaking number is only 366—366 companies in all of America that were found to be fully inclusive. While it’s a start, it’s also a reminder of how far we have to go.

This isn’t to deny the real progress that has been made. Quite a few corporate executives spoke out against bills designed to legalize discrimination in Indiana and Arizona, and they were rightfully applauded for their bravery and leadership. But, as I hope my own story indicates, corporate executives should focus on LGBT inclusion and equality not only because it’s the right thing to do. They should also do so because it’s good for their businesses.

The best and brightest LGBT millennials will have their choice of jobs, and they will choose the companies where they feel they can truly be themselves—companies where all employees can happily put a family photo on their desks, regardless of their sexual orientation. And when these LGBT employees arrive at their new jobs, they will make their new companies stronger not only directly through their work, but also indirectly through the creation of a more diverse and creative workforce.

The benefits to companies that reach out to the LGBT community won’t end there. Whether they’re members of the LGBT community or not, millennials want to work for socially responsible companies. When a corporation institutes new nondiscrimination protections or updates its benefits and diversity practices to be more inclusive, it sends a powerful signal to an entire generation that the company cares about doing what’s right. In many cases, that signal can be more powerful for recruiting than even the promise of big paychecks.

Change, of course, will only come when more of us speak out about the need for it. To this day, many states still have laws that make it possible to use a person’s sexual orientation as grounds for dismissal. That’s why it was so important for Tim Cook to publish his essay in Bloomberg Businessweek in 2014. And Cook is a great example of the larger point. As Cook put it, “I’ve had the good fortune to work at a company that loves creativity and innovation and knows it can only flourish when you embrace people’s differences. Not everyone is so lucky.” Imagine the enormous loss to Apple if Cook had not felt comfortable at the company and had left to work somewhere else.

But Tim Cook is only one person. The next generation of LGBT employees deserves corporate role models not just at Apple, but also at every other major company. It’s for this reason that I’m currently involved in a program that sends executives in the LGBT community to high schools to discuss career options for LGBT students. And it’s for this reason that every corporation that wants to rise to the top should be getting in front of LGBT groups at colleges and high schools across the country.

If corporate America can reach the LGBT community and demonstrate genuine support, it will have a huge impact on business and equality all at once. It’s great that there are now 366 fully inclusive and equal companies in America—but there are many thousands more to go.

Phil Schraeder is the president and COO at GumGum (@GumGum). He is based in Los Angeles.