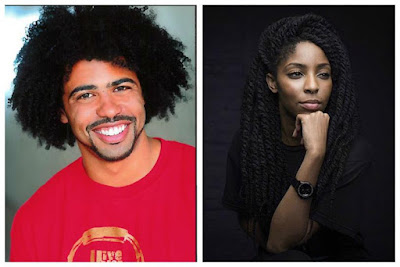 Daveed Diggs, Jessica Williams to host this year’s One Show

“Daily Show” alum Jessica Williams and “Hamilton” star Daveed Diggs will host the two nights of The One Show next month at Cipriani Wall Street in Manhattan. The awards show will take place as part of Creative Week, a celebration of advertising and the arts that also includes the 96th ADC Annual Awards.

“This year we wanted hosts who are not only terrific performers—both are just that— but who are also cool and culturally relevant,” said Kevin Swanepoel, CEO of The One Club for Creativity. “Daveed was a central figure in the cultural force that is ‘Hamilton,’ and Jessica was a linchpin on ‘The Daily Show,’ both of which have had a tremendous impact on today’s zeitgeist.”

The One Show recognizes the best work of the last year in more than a dozen categories. On May 10, Diggs will host the presentation of Gold, Silver and Bronze Pencils in branded entertainment, design, direct, moving image craft, print & outdoor, public relations and responsive environments. The Cultural Driver Award, which recognizes influential marketing that has had a noticeable impact on pop culture, will also be presented for the first time.

Two days later, Williams will host the presentation of Pencils for the cross-platform, film, intellectual property, interactive, mobile, radio, social influencer, social media and UX/UI categories. Special awards will also be presented, including Agency of the Year, Network of the Year, Holding Company of the Year, Client of the Year and Best of Show.

Diggs originated the role of the Marquis de Lafayette/Thomas Jefferson in the original off-Broadway run of Lin-Manuel Miranda’s musical “Hamilton” in 2015. He continued in the role when the show moved to Broadway later that year and won both a Tony and a Grammy Award for his performance. He has also appeared on ABC’s “Black-ish,” Baz Luhrmann’s “The Get Down” and has an upcoming role on “Unbreakable Kimmy Schmidt” on Netflix.

Williams is best known for her role as a correspondent on Comedy Central’s “The Daily Show with Jon Stewart.” She is the co-host of the podcast “2 Dope Queens” with comedian and writer Phoebe Robinson, and she stars as the title character in the Netflix film “The Incredible Jessica James” with Chris O’Dowd, to be released later this year.

In addition to The One Show, Creative Week features the ADC Annual Awards, presented on May 8 at Artbeam in Chelsea, followed by the Young Ones and the ADC Student Awards Ceremony on May 9. This year’s Young Ones competition features live pitches before a panel of judges from the United Nations, TOMs, BMW, Serviceplan and industry creatives.

On May 11, the one-day Creative Summit conference will feature speakers from creative agencies and brands like Cadillac, Columbia Records, Shutterstock, Pandora and Pinterest discussing how to reach younger audiences.

Email ThisBlogThis!Share to TwitterShare to FacebookShare to Pinterest
Labels: awards, campaign, diversity, diversity in advertising, exclusivity, the one club

News from the white woman focused Free The Bid. Remember how the Ad Council funnels all good high end work to white directors and producers and ad agencies, and saves video quality regional ads to minority ones? So that the winners of international competitions that beget more work are always white, white, white?

Now they're making sure white women directors, even if they're from overseas, are first in line before minorities. They're extending to them the promise of considering them for jobs and bids first, when they never once did the same for minority directors in America, ever.

"Free The Bid will be partnering with the Ad Council, the leading producer of public service advertisements in the United States for over 75 years.

The Ad Council is the non-profit behind well-known and iconic campaigns including Smokey Bear, “A Mind is a Terrible Thing to Waste” and “Love Has No Labels.” The Ad Council works with creative agencies on more than 40 national campaigns, each sponsored by non-profit organizations or federal government agencies. With the Ad Council’s pledge, each of these campaigns will now be guaranteed to consider the work of at least one female director during the triple-bid process.

“Signing the Free The Bid pledge was a no brainer. It’s an important step for our industry in ensuring that we have equal representation around the table. We’re thrilled to make sure more female directors are given the chance to lend their talent to our social good campaigns. Diverse perspectives results in better creative, hands down.”

It’s worse than that. Dig through the last five or six years of Ad Council PSA’s and you’ll see the pattern.

White male directors (or foreign ones) on every single PSA, even the ones with “Black” themes. Then those white directors get a reel full of Black work, get put up for more Black work from “Total Market” and/or Black agencies, and push out Black directors.

Scratch the surface of any supposedly Black commercial (featuring barbershops, hip hop, rapping, strong Black women, etc.) and you will 9 times out of 10 find a white director who got their start doing Ad Council PSA's.

All that’s going to happen now with this FreeTheBid bullshit is that white female directors will get a reel full of ethnic work and close more doors to minority directors, male OR female.