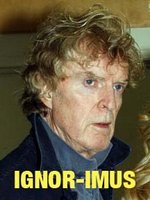 After years of offending just about everybody, Don Imus — radio’s original shock jock — may have finally gone too far by calling players for a beloved women’s basketball team “nappy-headed hos.”

Black leaders turned up the heat on Imus yesterday, dismissing his public apology for hurling the racial epithet at the mostly black basketball squad as tepid and vowing to picket his studio if he’s not kicked off the airwaves this week.

“If he’s still working there by Friday, we’re going to start picketing,” the Rev. Al Sharpton told The Post.

In his apology last Friday, Imus called his remark “insensitive” and “ill-conceived.”

“We can only accept his apology if we accept his resignation,” Sharpton said.

Imus has a history of racially-charged remarks — he called PBS journalist Gwen Ifill a “cleaning lady” and The New York Times’ William Rhoden “a quota hire.”

But Sharpton said the latest barb was the worst.

“I think that he has done things before in an opinionated way,” Sharpton said. “But to attack a whole group of people in the most ugly graphic terms [is] straight out racist.”
Posted by HighJive at 10:32 AM