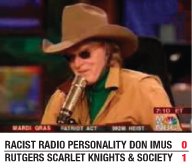 NEW YORK (AP) – Don Imus’ racist remarks got him fired by CBS on Thursday, the finale to a stunning fall for one of the nation’s most prominent broadcasters.

Imus was initially suspended for two weeks after he called the Rutgers women’s basketball team “nappy-headed hos” on the air last week. But outrage kept growing and advertisers kept bolting from his CBS radio show and its MSNBC simulcast, which was canceled Wednesday.

“There has been much discussion of the effect language like this has on our young people, particularly young women of color trying to make their way in this society,” CBS President and Chief Executive Officer Leslie Moonves said in announcing the decision. “That consideration has weighed most heavily on our minds as we made our decision.”

Imus had a long history of inflammatory remarks. But something struck a raw nerve when he targeted the Rutgers team -- which includes a class valedictorian, a future lawyer and a musical prodigy -- after they lost in the NCAA championship game.

A spokeswoman for the team said it did not have an immediate comment on Imus’ firing. But Imus was scheduled to meet with the team Thursday evening, according to the Rev. DeForest Soaries, the pastor of coach Vivian Stringer, who had been helping negotiate terms of the meeting.

The cantankerous Imus, once named one of the 25 Most Influential People in America by Time magazine and a member of the National Broadcasters Hall of Fame, issued repeated apologies as protests intensified. But it wasn’t enough as everyone from Hillary Clinton and Barack Obama to Oprah Winfrey joined the criticism.

The Rev. Al Sharpton and Jesse Jackson met with Moonves on Thursday to demand Imus’ removal, promising a rally outside CBS headquarters Saturday and an effort to persuade more advertisers to defect.

Jackson called the firing “a victory for public decency. No one should use the public airwaves to transmit racial or sexual degradation.”

Said Sharpton: “He says he wants to be forgiven. I hope he continues in that process. But we cannot afford a precedent established that the airways can commercialize and mainstream sexism and racism.”

Losing Imus will be a financial hit to CBS Radio, which also suffered when Howard Stern departed for satellite radio. The program earns about $15 million in annual revenue for CBS, which owns Imus’ home radio station WFAN-AM and manages Westwood One, the company that syndicates the show nationally.

“This may be our last Radiothon, so we need to raise about $100 million,” Imus cracked at the start of the event.

Volunteers were getting about 200 more pledges per hour than they did last year, with most callers expressing support for Imus, said phone bank supervisor Tony Gonzalez. The event benefited Tomorrows Children’s Fund, the CJ Foundation for SIDS and the Imus Ranch.

Imus, whose suspension was supposed to start next week, was in the awkward situation of broadcasting Thursday's radio program from the MSNBC studios in New Jersey, even though NBC News said the night before that MSNBC would no longer simulcast his program on television.

He didn’t attack MSNBC for its decision – “I understand the pressure they were under,” he said -- but complained the network was doing some unethical things during the broadcast. He didn’t elaborate.

The list of his potential guests began to shrink, too.

Imus has complained bitterly about a lack of support from one black politician, Harold Ford Jr., even though he strongly backed Ford’s campaign for Senate in Tennessee last year. Ford, now head of the Democratic Leadership Council, said Thursday he’ll leave it to others to decide Imus’ future.

“I don’t want to be viewed as piling on right now because Don Imus is a good friend and a decent man,” Ford said. “However, he did a reprehensible thing.”

Imus’ troubles have also affected his wife, author Deirdre Imus, whose household cleaning guide, “Green This!” came out this week. Her promotional tour has been called off “because of the enormous pressure that Deirdre and her family are under,” said Simon & Schuster publicist Victoria Meyer.

Imus still has a lot of support among radio managers across the country, many of whom grew up listening to him, said Tom Taylor, editor of the trade publication Inside Radio.

Yet he’s clearly became a political liability for CBS. (General Electric Co. owns NBC Universal, of which MSNBC is a part.) NBC News said anger about Imus among some of its employees had as much to do with ending the MSNBC simulcast as the advertiser defection.

Bryan Monroe, president of the National Association of Black Journalists and vice president and editor director of Ebony and Jet magazines, met with Moonves on Wednesday. It seemed clear Moonves and his aides were struggling with a difficult decision, he said. He urged them to take advantage of an opportunity to take a stand against the coarsening of culture.

At the end of their appearance, Winfrey said: “I want to borrow a line from Maya Angelou, who is a personal mentor of mine and I know you all also feel the same way about her. And she has said this many times, and I say this to you, on behalf of myself and every woman that I know, you make me proud to spell my name W-O-M-A-N.”

I support Imus and yes he made a ugly statement and should be punished for two weeks but not fired. He has done more for blacks then Al Sharpton and Jesse Jackson combined as they are far more hypocrite then Imus with how they live their lives and use Black people.

Is he a blowhard and an opportunist? Yup. Same for Sharpton--they both fought for Black folks against forces, groups and for issues when everybody told them to sit down like good like black boys should.

Don Imus has done nothing for black folks and for the record--any white person who has to stand up after 30 years for public life and "account for all the good they've done for black people" as Imus has tried to do for th elast few days, probably hasn't done much of anything.
The "i helped black people back in [insert instance here] is no different from the "i-have-some-black-friends" defense so many white folks have used and continue to use to excuse bigoted practices, remarks, actions, etc.


I don't care how many sick black kids he helps. that doesn't excuse his CONSISTENT TRACK RECORD of anti-Black bigotry.

Howard Stern got away with it for 25 years because he made so much money for the advertisers that it was worth the heat. Stern's a bigot, too. but he's a bigot on satellite now.

Imus is a bigot who doesn't have the economic drawing power to match the blowback so..