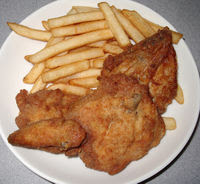 • KFC and Taco Bell officially announced that trans fats will no longer be used in the preparation of food. Additionally, buckets of chicken will be stamped with a health message. Will the Colonel be alongside the Surgeon General?

• A University of Chicago panel discussion asked, “Does Hip-Hop Hate Women?” Over 400 people assembled on Saturday to answer the question, with many participants dissing Russell Simmons for failing to do enough with his recent call for banning certain words. “We allow this language to go on,” said Amina Norman-Hawkins, a Chicago hip-hop emcee. “As a community, we don’t teach our little boys how to grow up to be men and respect women. We allow them to learn from the street what’s acceptable.” OK, but let’s also include folks like Don Imus in the equation.

• A study published in the American Journal of Education shows a dramatic increase in immigrants among Black students in colleges and universities. An Associated Press story stated, “Among students at 28 top U.S. universities, the representation of Black students of first- and second-generation immigrant origin (27 percent) was about twice their representation in the national population of Blacks their age (13 percent). Within the Ivy League, immigrant-origin students made up 41 percent of Black freshmen.” The study went on to offer reasons for the numbers. “To white observers, Black immigrants seem more polite, less hostile, more solicitous, and ‘easier to get along with.’ … Native Blacks are perceived in precisely the opposite fashion.” Gee, did Don Imus write the study?
Posted by HighJive at 9:24 AM