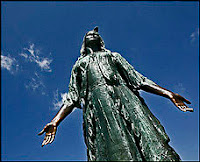 Out of Jamestown’s Shadows
Va. Indians Emerge from Grim History To Stake Claim in Anniversary Fanfare

John Smith and the English colonists sailed up a river they dubbed the James in 1607 and saw a vast, empty wilderness, nothing but “faire meddowes and goodly tall Trees.” The New World.

Just out of view, beyond the banks of the river, people were watching warily. They called the same river the Powhatan in their Algonquian language. They called the land Tsenacomoco, “our place.” To them, it was a world of bustling villages and thriving crops. Dugout canoes hewn by fire and clamshells and big enough for 40 warriors plied the rivers that ran like fingers through the coastal plain. Winter hunting camps dotted the edges of the mountains.

Today, to the untrained eye, all that remains of the Powhatan people are names on a map, such as Rappahannock and Potomac (Patawomeck), and words, such as raccoon and opossum, for the strange New World animals that did not exist in the English lexicon. By the time Gen. Robert E. Lee surrendered at Appomattox Court House in 1865, there wasn’t even a memory of the Appamattuck people who gave it its name.

But Virginia’s remaining Indians, out of view for so long, are emerging from the isolation and fear of discrimination that kept them hidden for centuries. For many, the hoopla over Jamestown’s 400th anniversary, instead of an event to be shunned for signaling the beginning of their end, is something to embrace. What better way to be “rediscovered?”

Powhatan Red Cloud Owen, a member of the Chickahominy tribe and a Jamestown events planner, remembers being dressed in full regalia as part of the opening ceremonies in 2004 for the National Museum of the American Indian in Washington. A Kiowa standing next to him turned and asked where he was from.

“No, where are your people from?” the questioner persisted.

“Never heard of them.”

In fact, the 1,200-acre Pamunkey and 125-acre Mattaponi reservations in King William County are among the oldest in the country, dating to a treaty with England in 1677. To this day, the tribes pay an annual tribute of deer and fowl to the governor of Virginia in keeping with the treaty.

In the 1980s, the state officially recognized these and six other tribes, the Chickahominy, Eastern Chickahominy, Rappahannock, Nansemond, Upper Mattaponi and Monacan nations. The latter six are petitioning Congress to become federally recognized, sovereign nations, like the Navajo, Sioux and Cherokee. Their bill has passed a House committee and is headed for a floor vote.

The tribes are hoping to use the Jamestown anniversary to further their cause. They demanded that the “celebration” be renamed a “commemoration.” They adopted a slogan, “First to Welcome, Last to be Recognized.” And before agreeing to participate, the tribes procured letters of support for federal recognition from Jamestown organizers.

“People are not going to care about us this much again for another 400 years,” said Karenne Wood, a Monacan and past chair of the Virginia Council on Indians. “We have to work quickly.”

So Virginia Indians will be performing native dances and drumming for Queen Elizabeth II. And native artisans will be throwing pots, carving wooden flutes and stringing intricate beadwork at the Jamestown festivities.

“We want our story to be told,” said Steve Adkins, chief of the Chickahominy who serves on the official Jamestown commission. “And we want to be the ones to tell it.”

[Click on the essay title above to read the full story.]
Posted by HighJive at 11:25 AM