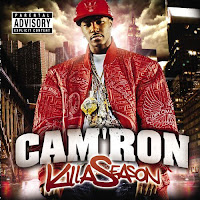 Speaking in code with a MultiCultClassics Monologue…

• Rapper Cam’ron explained his “code of ethics” during an interview with Anderson Cooper for 60 Minutes. For example, cooperating with police “would definitely hurt my business. And the way I was raised, I just don’t do that.” Given the hypothetical situation of living beside a serial killer, the rapper said, “I wouldn’t call and tell anybody on him — but I’d probably move.” The guy sounds like a mo’ron.

• Former President Bill Clinton spoke at the National Action Network conference on Thursday. Clinton told Black leaders to reduce their use of energy, see the opportunities of globalization and take better care of their health. Then he probably went to Mickey D’s for a Big Mac Extra Value Meal.
Posted by HighJive at 9:30 AM