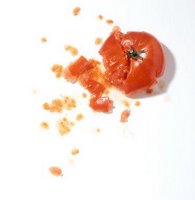 Throwing tomatoes in a MultiCultClassics Monologue…

• Burger King is the next target for a coalition of Florida farmers seeking to raise the price of tomatoes. The group spent two years in negotiations before getting McDonald’s to agree to a penny per pound increase. Earlier talks with Burger King resulted in the fast feeder refusing to say, “Have it your way.” So for now, hold the pickle, hold the lettuce — and the tomato.

• Interracial marriages are soaring in the U.S., according to Census Bureau figures. For example, Black-White unions rose from 65,000 in 1970 to 422,000 in 2005. It’s all leading to the natural increase of interracial children. “The racial divide in the U.S. is a fundamental divide. … but when you have the ‘other’ in your own family, it’s hard to think of them as ‘other’ anymore,” said one sociologist. “We see a blurring of the old lines, and that has to be a good thing, because the lines were artificial in the first place.” Artificial? Society sure has made a lot of real judgments based on something artificial.

• The Rutgers women’s basketball team met with Don Imus for three hours on Thursday night for a “very productive” meeting. One participant called the powwow “very intense,” although Imus offered no public comments. Coach Vivian Stringer said, “Players, coaches, parents, administrators, our pastor as well as Mr. Imus were ready to dialogue. Hopefully, we can put all of this behind us.” Imus probably does not feel like he’s got much of a behind left, as his ass has been justifiably kicked over the past week.
Posted by HighJive at 10:16 AM