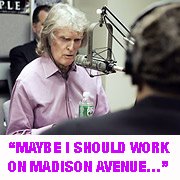 > There is no free speech issue here. There is no First Amendment right to an audience of millions, or to airwaves that belong to someone else, or to the support of advertisers. Imus is as free as he ever was to spout his bile to whomever he can find. — PORTLAND, OR

> What hypocrisy! It’s okay for Jackson and Sharpton to disparage the white lacrosse team from Duke, but not for Imus to make a mistake. Did Sharpton or Jackson apologize to the team for their remarks yet? The lacrosse team is actually innocent! Did Sharpton apologize for the Tawana Brawley case that ruined a man’s life and career? Yet somehow he has become the arbitrator of what is right and wrong. It’s a sad day in America and sadder even still if you’re a white male, the source of all evil… It’s gotten so crazy I’m afraid to call my garden shovel a spade! — Essex Junction, VT

> Say good-bye to the First Amendment. Anyone potentially offended by Don Imus was totally free to not listen to his program. Freedom to not listen is a little easier to take than the loss of freedom to talk. — Santa Fe Spring, CA

> CBS did Imus a favor. Give him a him month off and one of CBS’s competitors will put him on and pull huge ratings. — DALLAS, TX

> It’s disappointing to read Moonves chose to side with two demagogues, just to get some heat off his back. Miami, Florida — KEY BISCAYNE, FL

> Sharpton Won...And Whitey’s on the Run! What a bunch of wimps at MSNBC & CBS. A bunch of scared white guys listening to these Race-Baiters. And it’s just what Sharpton & Jackson want -- something to continue polarizing the races -- and keep them in business. And now, NBC will, of course, implement a uniformly applied ban on ALL Rappers and Comedians whose lyrics or routines have used racially exploitive, sexually demeaning or orientation insensitive...RIGHT? Chris Rock, Snoop Dog, Ludacris, Carlos Mencina, etc., and of course, the racist Radio-One Network, will all be no longer allowed on the air...Right? Then of course they’ll go after the “evil” Rush, Coulter, Hanity...et al. And let’s not for get the “Racist” new Halle Berry movie, “Nappily Ever After.” What...NO??? They aren’t going to do that...They’ll rather make an example of a 66 year old guy who made a dumb mistake...Of course that’s what they’ll do...because it’s simply the easiest thing to do. And it eases their liberal white guy guilt. — Kansas City, MO

> Fantastic. Racism is finally over. The President of CBS has made the decision to completely end this person’s career. The reason: “In our meetings with concerned groups, there has been much discussion of the effect language like this has on our young people, particularly young women of color trying to make their way in this society.” Ahhhh, that is soooo sweet to say. Now let’s get back to more coverage of the death, despair, destruction, and religious killing and hatred of war. Anna Nicole Smith’s DNA, John Mark Karr, and the fact that young women of color are still homeless from Katrina. CBS is now broadening the excuses…they now have men and women, “constituencies” or religious leaders, black and white, rich and poor, dogs and cats…all coming together to finally show how pathetic this company is regarding PR and how quickly this company will run from an issue. PS…watch out for the White House involvement. P&G also owns Iams, which has been playing up the pet food recall by orders of the White House. Verizon has all the spy phone connections that allow the Feds to listen to anyone without court orders. Verizon is the company that “plays ball” with the President and the State’s Attorney’s offices. These companies were ordered to take this response. This is the same tactic used against magazines and newspapers nationwide with this Administration to harm them from an advertiser point of view if they stop doing what it wants. Never forget who ran so quickly from an issue like these advertisers and networks. The phrase “women of color” is a racist statement. Why? It was made by a white male to describe “colored people” who are women. They are never of color…the color is of them. The CBS President is saying that a person’s color defines them and is of them. That is racist…especially coming from a white male. CBS must be punished for such a racist statement? — Brandon, FL
Posted by HighJive at 12:26 PM