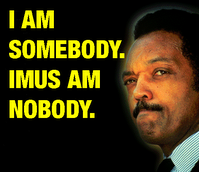 In the end, right message on Imus was aired

Don Imus has been taken down. His foul insult of the Rutgers women’s basketball team was the last straw for his employers. Hopefully, his fall will make other entertainers and the corporations that profit from peddling hateful insults take a good look at themselves -- from Ann Coulter with her foul-mouthed, homophobic gibes to Warner Brothers and others who profit from peddling the degradation of women in modern rap culture. If Imus' fall contributes even a bit to a less coarse, less racist and sexist culture, that would be an unalloyed good.

Now Imus’ enablers over the years -- the politicians like Joe Lieberman, the media voices like Tim Russert and Frank Rich -- must explain why they embraced Imus for so many years. Rich writes that he thought Imus an “authentic conversationalist,” while admitting his books could “always use the publicity.” He “gave Imus a pass” because the insults were “almost always aimed at people in the public eye … with the forums to defend themselves.”

Rich is blinded by his own privilege. How many African Americans host a network talk show? From 3 to 11 p.m. daily, there’s not a single show hosted by a black, Latino or Asian, except for Tavis Smiley on PBS. From 10 p.m. to 12 a.m., where Arsenio Hall was 15 years ago, there are now zero. The list of guests on the Sunday morning political talk shows is referred to as the “apartheid hour” because it is so devoid of women and people of color.

Now of course the reaction will set in against those who upset the established order. The Washington Post coughs up two commentators to attack those of us who challenged Imus’ bigotry. Joe Hicks calls Imus’ insult of the young women “a bad idea,” then bizarrely prates that removing Imus did nothing to solve the “plight of black urban communities.”

Look in the mirror, says Jonetta Rose Barras, “it was black rap artists” who opened the door to denigrating black women, erasing three centuries of loaded racial prejudices. Rich scorns those who assail Imus, suggesting that if we want to have a “conversation” about race, it had better include “hip-hop lyrics, ‘Borat,’ ‘South Park’ and maybe Larry David.” Any list should also include Mick Jagger’s “Brown Sugar” and “Some Girls” -- scornful descriptions of black women that predate rap.

The degradation of black women by powerful white men is as old as the culture. And while rap artists did not start the degradation, they ought to use their power to help stop it. Cleaning up the culture should not be so unimaginable. Just enforce obscenity laws. Do not use the public airways for gender, racial or religious degradation.

Global corporations make literally billions peddling trash. Let’s talk about that. Do we want no standards? Is profiting from bigotry, anti-Semitism, hate words and sexist tripe simply to be celebrated as somehow central to free speech or artistic expression? The First Amendment was designed to prohibit the government from censoring political speech, not to stop society from holding itself to standards beyond the gutter. If customers spurn companies or networks that profit from peddling racism, or employees are ashamed of their own companies’ complicity in hateful garbage, why isnt the Washington Post applauding that rather than scorning it?

Imus’ racist and sexist insult of these young women was not “a bad idea,” it was disgusting and mean. It wasn’t an aberration; it was part of his normal patter; he made big bucks peddling it. Let’s hope his departure leads to a broader look at what our corporate culture is selling. Let the complacent and the complicitous kick the messengers. I have no doubt this was a message that needed to be delivered.
Posted by HighJive at 6:22 PM