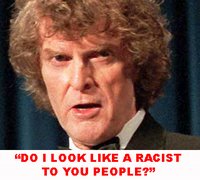 “I didn’t come here to get slapped around,” Imus snapped at one point to a journalist who questioned his avowed commitment to battling sickle cell anemia.

At another point, Imus angrily exclaimed to Congresswoman Carolyn Cheeks Kilpatrick — a Michigan Democrat and member of the House Appropriations Committee who is black and criticized Imus during the call-in portion of the program — “I can’t get anywhere with you people.”

Sharpton then jumped in saying, “Who is ‘you people…?’”

Imus testily countered: “That’s jive — I mean you two people. You said you were going to be fair. Keep your word.”

Voice rising, Sharpton then replied, “I’m in charge here. I asked you a question…”

Imus later even referred to himself as “an old cracker,” and Sharpton interrupted him, saying: “I’d prefer you’d respect your own race on my show.”

Alternately contrite and combative, Imus clearly didn’t study the standard playbook that’s been well-thumbed by any number of celebrities over the years caught in verbal indiscretions, most recently Michael Richards. Hatless and hair neatly combed, he spoke Monday morning during his own radio program — simulcast on MSNBC — when he said he was “embarrassed” by comments last week — a reference to his now-notorious “nappy-headed hos” slur directed at the Rutgers women’s basketball — while later noting, “I’m not a bad person. I’m a good person, but I said a bad thing. But these young women deserve to know it was not said with malice.”

But from the outset, Sharpton attempted to push Imus off-message, and he appeared to succeed at several points during the two-hour long show. There was little doubt about Sharpton’s intention — prior to Monday afternoon’s show, he called for Imus’ resignation, and repeated the demand several times during the program, while at the outset noted, Imus “made statements that we find deplorable and inexcusable, and over the last two or three days, as the controversy grew, several people that knew him reached out to me [to] say he’s a good guy [and] asked me to meet with him. I refused to meet with him in private but said that if we had any discussions, it would be in public.”

During the interview, Sharpton kept pushing him for accountability, saying “It can’t just be glossed over, if you walk away from this unscathed, the next guy can.”

He then referred to his ranch in New Mexico, where he has cared for underprivileged children over the years: “Our job at that ranch is to restore the dignity of these young people. What made me think I could make fun of these young women?”

Imus, who joined the show around 1:30 p.m., spent the first few minutes explaining the context of last week’s comment — that it was meant to be “funny” though added that in hindsight, it clearly was not. He defended his producer, Bernard McGuirk, who referred to “jigaboos,” saying he was actually referencing Spike Lee’s “School Daze.” “I was thinking like ‘West Side Story’…”

Sharpton later wondered “Why do you think we’re out of order” asking for a resignation.

Said Imus, “You have the right to do whatever you want, but anyone who called me a racist or a bigot or said ‘I don’t know anything about him’ or ‘I’ve never heard him’ but ‘I want him fired,’ that’s an ill-informed decision.”

Bryan Monroe, the president of the National Association of Black Journalists, who also appeared on the show, and at one point abruptly challenged Imus while he was talking about the work he had done raising money for sickle cell anemia research, said that the magazines he works for had been calling for sickle cell research back when Imus “was doing car commercials.”

Imus then angrily responded, “Sir, sir, you can keep talking all you want [but] don’t insult me. Don’t talk to me about used car commercials….You don’t have to get in my face with this. I don’t have to put up with this man getting in my face.”

Within seconds, Sharpton broke for a commercial.
Posted by HighJive at 5:41 PM