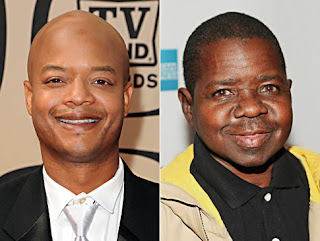 From The New York Daily News...

What will you talkin’ ‘bout, Willis?

A week after Gary Coleman’s untimely death at age 42, his former “Diff’rent Strokes” co-star is speaking out about what he claims is the late actor’s secret will.

Todd Bridges, 45, who played older brother Willis to Coleman’s Arnold on the hit series, told “Entertainment Tonight” that he is in possession of a document containing his old friend’s final wishes.

“[A friend of mine and I] have paperwork, and we’ll bring it out soon, that will show what his wishes were and what he wanted,” Bridges said. “There’s a big fight going on with his parents and some other people involved, and after we bring this paperwork out, everybody’s going to shut up.”

Sue and Willie Coleman are seeking custody of their son’s body. Coleman had a tumultuous relationship with his parents, successfully suing them and a former business manager in 1989 for misappropriating the money he earned as a child star.

“Gary had certain wishes [to exclude his parents]. I’m not going to go against a dying man’s wishes,” Bridges continued. “There’s a reason why he didn’t speak to them for 23 years.”

Also in the picture is Coleman’s ex-wife, Shannon Price, whom he divorced in 2008 but remained extremely close to. Price placed the 911 call upon discovering Coleman had hit his head - and was also the one to order he be taken off life support following his brain hemorrhage, raising questions of whether she had the right to do so.

“I don’t think anyone is looking at criminal wrongdoing here, but this raises the issue of the appropriateness of her making the decision to take him off life support,” lawyer Randy Kester, who handled Coleman’s divorce from 24-year-old Price, told the Daily News.

It is unclear whether Price and Coleman may have remarried after their divorce.

“The arrangement we’re working on now is to get Gary back to his next of kin, which is his parents,” Coleman’s former manager and family spokesman Victor Perillo told The Associated Press. “The funeral home has been notified, the sheriff’s office, we’ve notified them that there is to be no communication on where the body is to go unless it’s dealt with legally with Gary’s next of kin, and that’s the way it stands right now.”

Bridges asked fans to have sympathy for Coleman’s health problems and the difficult life he had faced.

“Imagine having major health problems. Imagine getting ripped off of all your money. Imagine being raised in a household where he wasn’t taught how to love himself or to love others around him,” Bridges said. “So when he hit the world at an adult age, he wasn’t prepared.”
Posted by HighJive at 11:10 AM