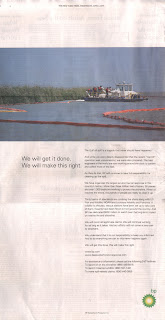 From The Associated Press

MIAMI — An apologetic advertising campaign by BP for causing the biggest oil spill in U.S. history has earned the company more criticism than sympathy as the pollution spreads across the Gulf Coast from Louisiana into Alabama and Florida.

The new radio, TV, online and print ads feature BP CEO Tony Hayward pledging to fix the damage caused by a gusher of crude oil unleashed by an April 20 drilling rig explosion that killed 11 people. He says the company will honor claims and “do everything we can so this never happens again.”

The ads, which began appearing last week have been criticized by President Barack Obama, who said the money should be spent on cleanup efforts and ol compensating fishermen and small business owners who’ve lost their jobs because of the spill, and to help residents and visitors of the Gulf Coast, where some beaches have been blackened by the oil and others remain threatened.

“Their best advertising is if they get this cap (in place) and they get everything cleaned up. All you’ve got to do is do your job and that’s going to be plenty of good advertising,” said Grover Robinson IV, chairman of the Escambia County Commission in the Florida Palhandle. He was referring to BP’s efforts to place a cap over the gushing pipe to capture some of the flow of oil.

BP PLC spokesman Robert Wine said in an e-mail Saturday that “not a cent” has been diverted from the oil spill response to pay for the ad campaign. He said he didn’t know its cost.

“All available resources are being deployed and efforts continue at full strength,” he wrote. BP estimates that it will spend about $84 million through June to compensate for lost wages and profits caused by the spill. The company has promised to pay all legitimate claims and no claim has yet been rejected, Wine said.

Shortly after the one-minute television and online version of the ad begins, Hayward speaks to the camera, saying “The Gulf spill is a tragedy that never should have happened.”

Hayward then narrates over images of boom laid in clear water before uncontaminated marshes and healthy pelicans. Cleanup crews walk with trash bags on white sand beaches as he youts the oil giant’s response efforts: more than 2 million feet of boom, 30 planes and more than 1,300 boats deployed, along with thousands of workers at no cost to taxpayers.

The ad’s imagery clashes with disturbing news photographs published recently of pelicans coated in oil, some immobilized by the gunk, others struggling with crude dripping from their beaks and wings.

“To those affected and your families, I’m deeply sorry,” Hayward says in the ad.

As the ad fades out to show BP’s website and volunteer hot line, he says, “We will get this done. We will make this right.” In the Florida Panhandle, the ads have been received about as well as the sticky tar balls and rust-colored froth that began washing ashore Friday.

Picking up tar Saturday with her parents on Pensacola Beach, 13-year-old Annie Landrum of Birmingham, Ala., called Hayward’s apology a joke.

“It’s a lame attempt a month and half after the disaster. It’s too late,” she said.

On Sunday, Hayward told BBC television that he had the “absolute intention of seeing this through to the end.”

He said he believed the cap is likely to capture “the majority, probably the vast majority” of the oil gushing from the well. Hayward also told the BBC his company had been left devastated by the disaster, and conceded that safety standards must dramatically improve.

Public-relations experts said BP’s ad blitz seems premature and a little shallow. BP missed an opportunity to shift focus away from criticism of the company and toward BP’s strategy for cleaning up the spill, said Gene Grabowski, a senior vice president with Levick Strategic Communications.

“The one element they seem to be missing is laying out a plan for what they’re going to do. Usually in ads like these you apologize; he’s doing that in the ad. You talk about your resolve to fix the situation; that’s also included. But what’s missing is a concrete plan or vision for what they plan to do next,” he said.
Posted by HighJive at 2:06 PM