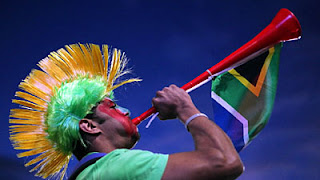 Just as we were getting used to the monotonous drone of the South African vuvuzelas, an even louder din arose from the 2010 World Cup: the whining of players and fans who want to silence the host nation’s traditional stadium horns.

Tens of thousands of the colorful plastic trumpets have been sold every day since the World Cup opened for the first time in an African country. A single vuvuzela (voo-voo-ZAY-la) emits a sound variously described as a bleat, blast, honk or wail; thousands blown in unison produce a buzz that has been likened to a swarm of mosquitoes, a flock of mating geese, a giant kazoo or a sustained bout of flatulence. You can download the ringtone from iTunes. You know you want it.

We’ve noticed that players coming off a disappointing performance are disproportionately likely to grouse that they couldn’t hear their teammates’ shouts or the referee’s whistle. Tough luck. The vuvuzela is essential to the South African football experience. You’re a guest in their country. Act like it.

This controversy reminds us of nothing so much as the local uproar over Blackhawks fans screaming the national anthem. Fair-weather fans tuning in for the first time in almost 50 years couldn’t stand the sight of the hockey faithful doing its thing in its own house. Who asked for their opinion?

The vuvuzela haters claim the horns are a health risk. A team of researchers determined that the noise at one game averaged 100.5 decibels and peaked at 144; doctors recommend ear protection at 85 decibels. The trumpets also spread colds and flu by spraying tiny germ-filled droplets. But still. People who are bothered by germs and noise have no business in a venue that seats 44,000.

Even those watching on television are complaining. They paid $1,800 for that HD model and it’s humming like an old analog. Sound technicians have their work cut out for them, adjusting the mics constantly to amplify the action closest to the ball, but they’re doing a pretty good job of it, and the BBC offers one channel with the horns filtered out. You can get the same effect by watching the Cup surrounded by the table buzz at your local tavern. Or of course, there’s always the mute button.

Cup organizers won’t ban vuvuzelas as long as the revelers don’t blow them during national anthems, throw them on the field or whack each other with them.

”We should not try to Europeanize an African World Cup,” said Sepp Blatter, president of soccer’s international governing body. “Vuvuzelas, drums and singing are part of African football culture. It is part of their celebration. Let them blow it.” In other words, buzz off.
Posted by HighJive at 12:27 PM