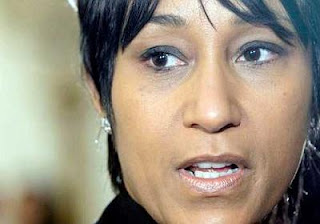 The news comes just two days after Johnson Publishing Chief Executive Officer Linda Johnson Rice hired author and magazine turnaround expert Amy Dubois Barnett as the new editor-in-chief of Ebony magazine and declared that the company is not for sale.

A Johnson Publishing spokeswoman declined to give details about Rogers’ role.

Rogers left the Obama administration earlier this year after she got caught up in controversy over a White House security breach.

Johnson Publishing, the world’s largest African-American owned and operated publishing company, based at 820 S. Michigan, is facing the same dilemma as much of the print-media world—sharply declining advertising revenue. The company has recently redesigned Ebony and Jet magazines to appeal to younger readers and to reflect diverse opinions.
Posted by HighJive at 3:12 PM