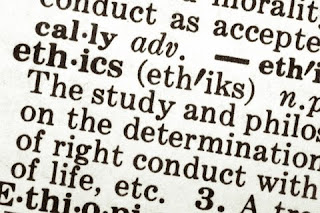 Advertising Age reported on the creation of an Institute for Advertising Ethics. The goal of the organization will be to combat the negative perceptions the public has about the ad industry. As always, the morons behind this effort don’t seem to realize there’s a very easy way to appear more ethical: Be more ethical. Lead idiot Wally Snyder actually had the audacity to compare the IAE to other AAF pipe dreams like the Mosaic Awards and diversity initiatives. Um, pointing to the “success” of such things only confirms the dearth of ethics—as well as the dearth of ethnics.

NEW YORK (AdAge.com) -- It’s no secret that consumers don’t exactly think highly of the advertising industry—especially when it comes to ethics. So the American Advertising Foundation is teaming up with the University of Missouri’s Reynolds Journalism Institute this week to launch an Institute for Advertising Ethics.

In a 2007 Gallup/USA Today Poll, advertising practitioners ranked third from last among professions in public perception of honesty and ethics, just ahead of lobbyists and car salesmen and below congressmen, state officeholders and business executives.

The institute, to be formally announced at the AAF national conference June 11 in Orlando, will research what matters most to consumers regarding advertising ethics, and will develop a set of principles for marketers and agencies to follow.

The AAF is providing seed money, office space and staffing to help launch and run the institute, which the group’s former president, Wally Snyder, will head as executive director. An advisory board of current and former industry leaders includes former Procter & Gamble Co. Global Marketing Officer Bob Wehling, who said he began pushing to create the institute in 2008 in response to the Gallup poll.

“I’ve been concerned about this issue my whole life,” Mr. Wehling said. “I’ve seen so many people shade the truth. This is my profession, and I feel like it’s being desecrated by so many people.”

University of Missouri research, led by Mr. Snyder as an adjunct professor, indicates honest advertising is the single biggest factor in corporate reputation, ranking ahead of sustainability and corporate-social-responsibility programs.

Yet about a third of consumers don’t feel advertising is ethical, Mr. Snyder said.

“So there’s an opportunity here to really enhance the ethics,” he said. “And as companies do that, they’re going to really get a better response.”

What people think
Missouri’s research, if anything, is more forgiving than Gallup’s, which found only 6% of people gave advertising practitioners high or very high marks for ethics, compared to 42% who gave them low or very low marks.

“How are we ever going to have a positive relationship with our consumers and recruit the best and brightest people into the profession in the future if people think we’re charlatans?” Mr. Wehling said.

When he accepted his entry into the AAF Hall of Achievement in 2008, about five months after the poll came out, Mr. Wehling called on attendees to take up the charge to improve the industry’s image. He said the effort got immediate support from Mr. Snyder and some others now on the new institute’s board of advisers, such as Omnicom Group Vice Chairman Tim Love and William Price, founder of Cincinnati media agency Empower Media Marketing, a Missouri alum.

The institute’s first order of business is conducting research on what matters to consumers regarding advertising ethics, including in emerging areas such as behavioral targeting and online privacy, said Margaret Duffy, associate professor of strategic communications at Missouri, who will lead a research effort that will also include in-depth interviews with industry practitioners and CEOs.

New program
The institute’s board of advisers also will establish a program the first year to recognize advertisers who demonstrate high ethical standards.

In year two, the institute will introduce a set of guiding principles for advertising ethics and begin discussions with industry players on how to apply them. Mr. Wehling said he would like to see everyone in the industry annually sign a pledge to adhere to ethical standards.

He compared the ethics drive to another effort he spearheaded in the 1990s via the Association of National Advertisers—the Family Friendly Programming Council—since redubbed the Alliance for Family Entertainment. Mr. Snyder compared the IAE to another AAF initiative, the Mosaic program to encourage progress on multicultural advertising and diversity.

While the ad industry has made progress on multicultural marketing since the AAF launched Mosaic, and many advertisers have substantially increased representation of ethnic minorities in their management ranks, general-market advertising agencies record is still so poor they face the prospect of a class-action diversity lawsuit.

Industry goal
Mr. Wehling said he hopes to “keep the issue in front of people until we see those polls say something different, which I think is going to be in my grandchildren’s lifetime, but certainly not mine.”

Besides Messrs. Snyder, Wehling, Love and Price and Ms. Duffy, other board members of the Institute include David Bell, chairman emeritus of Interpublic Group of Cos. and adviser to Pegasus Capital Advisors; Linda Eatherton, director of Ketchum’s global food and nutrition practice; and Tiffany Warren, chief diversity officer of Omnicom. Mr. Datri joins Dean Mills, dean of the Missouri School of Journalism, among ex-officio board members.
Posted by HighJive at 12:47 AM

Anonymous said...
This comment has been removed by the author.
9:31 AM

Advertising doesn’t need an ethics institute (do I get a certificate after completing the night course?), it needs internal affairs.