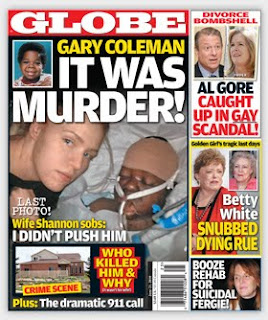 In yet another tragic twist in the saga of late former child star Gary Coleman, a shocking photo of the actor on his deathbed was released today on the cover of Globe Magazine with the splashy headline ‘IT WAS MURDER.’

As Coleman lies inert with eyes closed in the photo, bandaged and breathing from tubes, his ex-wife Shannon Price stands by his side looking directly into the camera. Price made headlines this week after rumors circulated that she had tried to profit by marketing other photos of Coleman.

Dion Mial, Coleman’s longtime friend, former manager and executor of a 1999 copy of his will, has accused Price of selling the deathbed photo to the Globe. He labeled it an “ongoing desperate attempt” to capitalize from the tragedy, reports CNN.

Price’s rep did not deny Mial’s accusation but did release a statement saying Price needed money because she had helped Mial pay for a lawyer.

American Media, the Globe’s parent company, admitted it did buy the photo, which is purported to be the last one ever taken of the ill-fated actor. Spokesperson Samantha Trenk, however, would not confirm what was paid for the image or who sold it, according to CNN.com.

Although Coleman and Price, 24, were legally divorced at the time of his death, it was confirmed by Utah Valley Regional Medical Center that Price did have legal consent from Coleman to make medical decisions on his behalf.

Price also told ABC’s Good Morning America Monday that the two were very much still together and in fact had planned to renew their vows.
Posted by HighJive at 10:49 PM