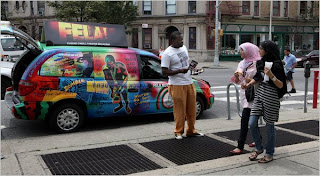 They thought it was about Elvis.

That’s what a focus group of a dozen African-American women concluded about the musical “Memphis” last summer when they were asked to assess the show’s tagline, “The Birth of Rock ’n’ Roll.”

But after seeing artwork featuring Felicia, the black R&B singer in the show, and after hearing about the turbulent romance between the character and a white D.J., the women in the focus group said the show was much more up their alley.

With that in mind, the producers changed the “Memphis” tagline before opening on Broadway to: “His Vision, Her Voice. The Birth of Rock ’n’ Roll.”

The use of focus groups is one of several diversity strategies, aggressive by theater standards, used not only by “Memphis” but also by another new Broadway musical, “Fela!”; the new play “Race”; and the revival of “Fences” — all shows centered on black characters, who are rarely in the forefront of major plays and musicals.

While the “Memphis” producers estimate that 25 to 30 percent of their audience is black, the producers of “Fela!” and “Race” say that their outreach has resulted in black theatergoers’ making up 40 percent of attendees. “Fences” and its star, Denzel Washington, are also drawing large numbers of black people, though the show began selling out early and has been a tough ticket to obtain, a spokesman said.

Broadway shows about black characters often draw black theatergoers, but the producers of “Memphis” and “Fela!” as well as producers of some coming shows are particularly going after African-Americans, given that Broadway’s overall attendance has been on the decline, down 3 percent for the 2009-10 season. Whether black theatergoers become a larger, reliable part of the Broadway audience remains to be seen, as do the range and quality of the shows that are offered to appeal to them.

Yet producers clearly sense a market that has not been tapped out: This fall’s Broadway lineup already includes two new musicals about black men, “Unchain My Heart: The Ray Charles Musical” and “The Scottsboro Boys,” and possibly the new two-character play “The Mountaintop,” about the Rev. Dr. Martin Luther King Jr., depending on whether the producers can land the stars Samuel L. Jackson and Halle Berry.

Indeed, the producers of “Memphis” credit word of mouth among black people for helping keep the show alive through slow-selling weeks to reach the Tony Award voting season that began in May and ended when “Memphis” won the top award for best new musical this month.

While some theater critics and rival producers have derided “Memphis” as a conventional show and have spurned its story of racial reconciliation as simplistic, the musical’s success at building a black audience is anything but business as usual for Broadway. Yes, some of the marketing strategies were tried before with the 2005 musical adaptation of “The Color Purple,” but that show had a well-known title and Oprah Winfrey’s endorsement going for it.

By contrast, “Memphis” has no stars and an unknown score and story. But its producers believed that their show would become known as memorable entertainment if buzz spread among enough so-called Broadway taste-makers — who, in the case of “Memphis,” were not the usual critics, bloggers and veteran theatergoers, but instead African-American ministers, choir directors and black women.

“Anyone who says that ‘Memphis’ is somehow unoriginal as a piece of musical theater is missing the impact that the show is having on a wide cross section of people who feel that Broadway isn’t usually for them,” said Sue Frost, a lead producer of “Memphis,” who noted with pride that Michelle Obama took her two daughters to a performance of the musical this spring. (The three also caught “The Addams Family.”)

The R&B flavor of the show, and the serious treatment of African-American life in the segregated 1950s, were the selling points of the show for Willie Anderson, a tourist from Atlanta who took a group of 11 relatives and friends to a recent performance. Each paid $94 a ticket.

“We wanted to see something with some African flavor, and what we heard in Atlanta was that ‘Memphis’ was a show worth seeing,” Mr. Anderson said. “The main thing is, you want music that you’ll appreciate and like. I have nothing against ‘Mary Poppins,’ but I don’t see that as a show for us like ‘Memphis’ will be.”

One theater group-sales company that focuses on minorities, Full House Theater Tickets Inc., reported that “Memphis,” “Race,” and “Fela!” had drawn disproportionately large numbers of African-Americans. (Group sales are a cornerstone of commercial success for most shows.) “Fela!,” about the Afrobeat musician Fela Kuti, has sent vans emblazoned with the show’s logo and playing Mr. Kuti’s music to racially diverse neighborhoods, where the drivers hand out brochures for the show and talk it up to passers-by.

“Part of the appeal of these shows is that they give black audiences something to talk about,” said Sandie M. Smith, president of Full House. “For ‘Race,’ we went after and got African-American attorneys’ associations, groups that dealt with the justice system and, in some cases, created post-show discussions because there were rich topics to discuss.”

Many of these post-performance conversations have happened at the theater district restaurant B. Smith’s, named for its owner, the black entrepreneur and former television show host.

To expose young people to Broadway and, with luck, spread word about the show to more parents, the “Memphis” producers spent $75,000 on their own program, Inspire Change, that has sent cast members into schools and then students from those schools — nearly 1,000 so far — to the musical. The program began after a fifth-grade teacher at the KIPP Star College Prep Charter School, in Harlem, wrote to the “Memphis” producers after seeing a performance and asked if the musical had an educational outreach component and discount tickets for students.

“A week after we saw it,” said the teacher, Trenton Price, “I introduced the vocabulary word ‘integrate’ in class, and a kid used an example from ‘Memphis’ — about how the white D.J. goes into Felicia’s bar, but the bar wasn’t integrated at that point.”

Felicia, the R&B singer who is the leading lady of the show (played by Montego Glover), has proved to be a draw for African-Americans. The marketing team for “Memphis” played clips of Ms. Glover singing Felicia’s big first-act number, “Colored Woman,” at Harlem street fairs, as well as at beauty salons, churches and community centers in predominantly black neighborhoods in New York City.

The lyrics — “Colored woman with few chances/Has to do what she must do!” — proved captivating to women in particular, according to Ms. Frost, the producer.

Still, Ms. Frost and her main producing partner, Randy Adams, acknowledged that African-American support was not enough to sustain a Broadway show: “Memphis” grossed $835,071 for the week ending June 20, its best box office week so far, but the show has sold unevenly during some weeks and is far away from turning a profit.

“It takes time to reach a tipping-point moment where everyone is talking about your show,” Mr. Adams said. “We just have to keep faith that our fans will continue spreading the word.”
Posted by HighJive at 5:42 PM