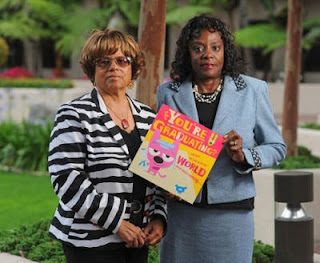 [A] Hallmark greeting card either delivers some quirky, fiery graduation wishes or it conveys a racist attack against black women.

The Carson-Torrance branch of the NAACP claims the musical card — featuring cartoon dogs Hoops and Yoyo — is a low blow at African-Americans.

On Tuesday, the Carson City Council will vote on a resolution to encourage Hallmark Cards Inc. to quickly remove the card wherever it is sold.

Local black leaders claim that it is a thinly veiled racist message. The main point of contention is the use of the phrase “black holes,” which some believe actually says “black whores” or “black hos.”

“It’s passive intent aggressively stated in a way that makes African-Americans feel insulted,” said Olivia Verrett, president of the Carson-Torrance branch of the National Association for the Advancement of Colored People.

The card is saying that “I (as a black woman) am below class, and feel as though I can run the universe, but I’m not going to run the universe because I have to watch my back,” Verrett said.

The card came to the attention of the Los Angeles and Carson-Torrance NAACP chapters recently, after the Chicago chapter notified them about it, she said.

The card says: “You’re graduating? Well then, it’s time to let the world know what’s coming. … But not only the world, noooo! We’re talking the entire solar system! The world is yours grad!”

High-pitched voices in the card’s automated recording jokingly threaten the world and universe: “You better watch out ‘cause this graduate here’s kicking rear and takin’ names (laughter). This graduate’s gonna run the world, run the universe, and run everything after that, whatever that is. And you black holes — you’re so ominous (laughter). Congratulations! And you planets — watch your back!”

Steve Doyal, spokesman for Hallmark Cards Inc., said the company does not believe the card is racist. But because of complaints from the NAACP, it has already destroyed its inventory of the card, which has been in circulation for three years. Hallmark has also alerted its stores and franchises to remove the card from shelves, and offered to reimburse franchise locations for the expense, Doyal said.

“We believe that the intent of the card was clear,” Doyal said. “It’s solar system-universe based. When it was pointed out to us that some people did not hear what we intended to do, we removed it from the marketplace. I don’t think there’s anything more we can do. We’ve demonstrated positive intent and hope people recognize that.”

But Verrett and others said Hallmark should issue a formal apology to African-Americans. They also said they found the card in Hallmark stores in Redondo Beach and on the Palos Verdes Peninsula as recently as last week.

Councilwoman Lula Davis-Holmes, who is an NAACP member, said she will probably vote in support of the resolution on Tuesday.

“I’m insulted in the first place because we, as black women, cannot be victimized if, in fact, it says ‘ho,”’ she said. “I think Hallmark owes an apology. If there’s an inkling of a doubt, it should be dealt with. People are outraged.”
Posted by HighJive at 1:47 PM