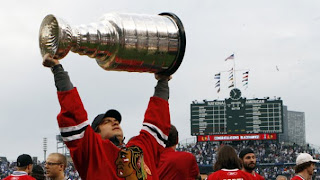 An eclectic mix of stars — The Stanley Cup with Blackhawks defenseman Brent Sopel, The Cubs’ Ernie Banks and country singer Chely Wright — basked in the celebration of an estimated 400,000 who attended the 41st Annual Pride Parade in the Lakeview neighborhood. The parade started at noon.

Sopel, who was traded last week to the Atlanta Thrashers but will remain in Chicago throughout the summer, said he intends to make Chicago his home, even if only in retirement.

“Chicago has brought me great memories and I hope to one day be playing again for the Blackhawks,” he said. “After my career is done, I’ll be staying here.”

Sopel, who stood on the float of the Chicago Gay Hockey Association, said he participated in the parade to honor the memory of the gay son of his former general manager.

Brendan Burke had come out as a gay man when he was 21 and working for the hockey team at Miami University of Ohio. He was killed in February in a car accident on a snowy and icy road in Indiana. Burke is the son of Brian Burke, the general manager of the Toronto Maple Leafs and the U.S. men’s Olympic hockey team. The elder Burke was Sopel’s general manager while he played with the Vancouver Canucks.

“Anyone who buries his son is heartbroken,” Sopel said. “It should never happen. It’s in their honor that I’m participating.”

Sopel was accompanied by his wife, Kelly, who wore badges with the initials “BB” in Brendan Burke’s memory. He said the couple’s children didn’t attend because they didn’t want to endure another huge crowd scene and the time and effort it requires.

“We raise our kids to believe that everyone is equal,” said Sopel, a 33-year-old native of Saskatchewan, Canada. “Everyone is a person, regardless of race, color or religion.”

Sopel said he believes that gays “lead a tough life trying to deal with all of the stereotypes” and he hopes one day, “things will be clear and wide open for everybody.”

Banks rode in a convertible with the Ricketts family, who bought the Cubs last fall and who made the team’s first official appearance in the parade.

Banks said he participated for the first time at the Ricketts’ behest and to thank the neighborhood Cubs fans.

“I know the area — Boystown — and they’ve all been very nice and friendly with me,” Banks said. “I want to show that I have compassion for them.

“They know the game and have great respect for the players,” he said.

The parade reflected several themes top-of-mind in the gay community, including the Obama administration’s perceived foot-dragging in ridding the military of the “don’t ask/don’t tell” rule, the need for a federal law outlawing workplace discrimination, and their desire to see gay marriage legalized nationwide.
Posted by HighJive at 2:41 PM