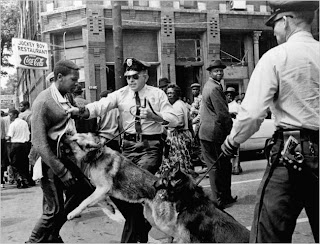 Hudson, 77, a Photojournalist During the Civil Rights Era

Bill Hudson, an Associated Press photographer whose powerful images of the civil rights era documented police brutality and helped galvanize the public, died Thursday in Jacksonville, Fla. He was 77.

The cause was congestive heart failure, said his wife, Patricia. He lived in Ponte Vedra Beach, Fla.

Mr. Hudson worked in photojournalism for more than three decades, beginning as an Army photographer in the Korean War. Covering the civil rights movement in the 1960s, he photographed protests in Birmingham and Selma, Ala., where the police turned dogs and fire hoses on demonstrators.

His most enduring photograph of the era, taken on May 3, 1963, shows an officer in Birmingham grabbing a young black man, Walter Gadsden, and letting a police dog lunge at his stomach.

The photograph appeared across three columns at the top of the next day’s front page of The New York Times.

In “Carry Me Home,” a 2001 book about the civil rights era in Birmingham, Diane McWhorter wrote that the photograph helped move “international opinion to the side of the civil rights revolution.”

Mr. Hudson’s wife said he encountered a great deal of animosity from those who did not want him documenting the treatment of the protesters. “Sometimes people were throwing rocks and bricks at him,” she said.

Mr. Hudson was born Aug. 20, 1932, in Detroit and began his career in the Army in 1949. He later took photographs for The Press-Register of Mobile, Ala., and The Chattanooga Times in Tennessee before joining The Associated Press in Memphis in 1962. He left The A.P. in 1974, joining United Press International.

Besides his wife, Mr. Hudson is survived by a sister, Sharon Garrison of Laguna Beach, Calif.
Posted by HighJive at 8:37 PM