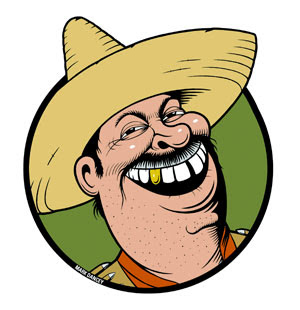 Gustavo Arellano, the writer of the satiric “¡Ask a Mexican!” column in the OC Weekly, delivered a commencement speech Friday night to UCLA’s College of Letters and Science and took note of two groups that did not want him there.

Labor unions had asked Arellano and other University of California graduation speakers to drop out of the ceremonies in solidarity with workers’ protests against UC.

Arellano instead urged the 4,500 graduates to thank the custodians and cafeteria workers for their hard work and “to raise Cain with those responsible for slashing the funds and budgets that imperil our beautiful campus and its faithful employees,” according to an advance text.

Arellano, who earned a master’s in Latin American studies at UCLA in 2003, also mentioned critics who said he was not enough of a celebrity to merit the honor. “I only regret that the Facebook group created against me didn’t have more members than the one students created last year against James Franco,” he said jokingly.

Franco, the film actor who also is a UCLA alumnus, dropped out as speaker last year, saying work obligations had kept him abroad, but some students suspected that he did not want to face similar protests against his selection.

In his speech, Arellano praised former UCLA basketball Coach John Wooden, who died last week at age 99, describing the coach as a model of fortitude in tough times. Arellano said that Wooden, then a young man, had lost his life savings in the banking collapse of the Great Depression but was undeterred.

“Yes, Class of 2010, Coach Wooden was a college graduate nervous about the future. And I am sure he’d be the first to say that if an Indiana farm boy could make his life a masterpiece and better us all in the process, so can you.”

The graduation ceremony included a special tribute to Wooden, featuring a procession of athletes and other students carrying flags.
Posted by HighJive at 2:56 PM