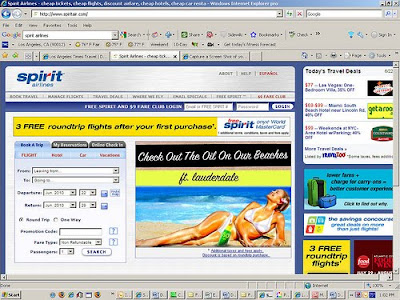 Spirit Airlines says: ‘Check Out the Oil on Our Beaches’

Sometimes, a disaster brings out the best in people. Sometimes, not so much. The Gulf oil spill seems to have set off a particularly bad outbreak of foot-in-mouth disease.

BP’s chief executive, Tony Hayward, wanted his “life back.” BP’s chairman, Carl-Henric Svanberg, said the oil company really does care about the “small people” who are suffering. And now Spirit Airlines, whose sale promotion urges folks to “Check Out the Oil on Our Beaches.”

Todd Wright, writing a post on NBC’s Miami website, says this: ”With hotels and other tourism-related businesses in panic mode awaiting the black ooze from the Gulf oil spill, now is not the time for parody.”

Spirit Airlines issued this response Tuesday: “It is unfortunate that some have misunderstood our intention with today’s beach promotion. We are merely addressing the false perception that we have oil on our beaches, and we are encouraging customers to support Florida and our other beach destinations by continuing to travel to these vacation hot spots.”

The statement added: “The only oil you’ll find when traveling to our beaches is sun tan oil.” Which was the point that the airline apparently intended to make with the advertisement.

But still. We don’t call airfare sales to California “fire sales” during the wildfire season, do we? We didn’t call fare sales to the East Coast last winter a “blizzard of savings,” did we? We didn’t advertise a “flood of low fares” to New Orleans post-Katrina, did we?