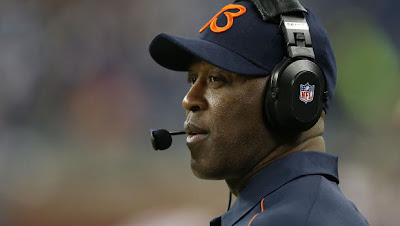 Lovie and the middle-manager’s lament

Fans typically think of the professional football coach as CEO of the team. Not so.

The Chicago Bears have a chief executive, Ted Phillips. They have a general manager, Phil Emery. On the organization chart — and in point of fact — both outrank the coach they just fired, Lovie Smith. The Bears also have directors, most notably from the McCaskey family, who oversee the team in much the same way as any family-dominated corporate board.

In essence, Smith was a middle manager. A very high-profile one, but that’s what he was.

The firing of Smith and six other NFL head coaches on Monday brings to mind the fate of many middle managers. They are responsible for the failure or success of the businesses they help to run. But in many cases, they have less control than meets the eye.

They are subordinate to the senior leaders above them, but also vulnerable if their subordinates do not perform as well as expected. (Jay Cutler, performance review time.)

Middle managers make important decisions, which are subject to being second-guessed by bosses and subordinates alike. They have to live with the decisions of their bosses, operating within the constraints so imposed.

That’s life in a hierarchical organization, and we suspect it’s getting harder.

In the business world, increasingly, middle managers have been marginalized. Companies pay more and more to top executives, while viewing those just below that level as either rising stars or underperforming assets. It’s up or out.

According to the stereotype, middle managers of yore mostly shuffled papers and attended meetings. If that notion were ever true, times have changed. In these days of lean organizations, the work gets piled on. Middle managers tend to get so buried they focus only on day-to-day tasks, by necessity, with no larger purpose in mind.

Management experts worry about that trend, which is driven more by cost considerations than solid principles. The phenomenon is known as the “missing middle,” and it can undermine an organization.

Leading an organization of any size means setting a strategy to achieve well-defined goals, and communicating that strategy from top to bottom. It can’t be done without effective middle managers. Those unsung heroes often have the biggest influence on engaging and motivating employees.

In the case of the Bears, a chronically underperforming offense did in the head coach. In a broader sense, Smith’s departure from the team provides an opportunity for a reboot of strategy. When there is a misfit in the direction of bosses and their middle-managers, then a change needs to be made. That’s the case with Chicago’s football team.

Emery will need a coach who understands pro football, of course. But he also will need what an effective middle manager brings: buy-in from the organization’s employees. The players need to believe in the strategy.

We found a lot to admire in the quiet, calm confidence of Lovie Smith. He’s still the only coach since Mike Ditka to take the Bears to the Super Bowl. Heck, he’s the only coach since Ditka to win more than one playoff game. He got well-deserved credit for fielding some tough Bears-style defenses. This year’s was a takeaway machine. Interceptions and fumble recoveries were a top priority for Smith. His players knew it. They did it well.

But as in any business, there’s a matter of accountability. The Bears haven’t been a consistent success on the field. A year ago, the team fired the general manager. On Monday, the team made a management change one level down.

There’ll be lots of talk about whether the team should find an offensive genius or a defensive genius. (How about a good left tackle? That can help a coach look like a genius.)

The team also will be shopping for the gifted person who can fill an underappreciated role.