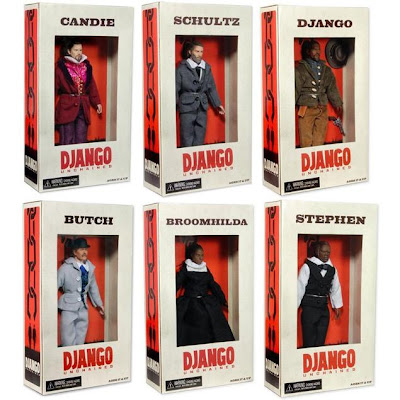 ‘Selling this doll is highly offensive to our ancestors and the African American community,’ Rev. K.W. Tulloss, NAC’s president in Los Angeles, told the Daily News.

Rev. Al Sharpton’s National Action Network called for a national boycott Tuesday of action figures based on the controversial and blood-soaked slavery revenge flick “Django Unchained.” A 10-doll assortment of characters from the film was going for $299 on Amazon Tuesday.

“Selling this doll is highly offensive to our ancestors and the African American community,” Rev. K.W. Tulloss, NAC’s president in Los Angeles, told the Daily News. “The movie is for adults, but these are action figures that appeal to children. We don’t want other individuals to utilize them for their entertainment, to make a mockery of slavery.”

“I actually enjoyed the movie, but we cannot support this type of commercialization,” Ali said. “I don’t seen any dolls representing Hitler that came from Tarantino’s (Holocaust movie ‘Inglourious Basterds’)…I don’t see them making dolls of Holocaust survivors who are bald and starving in concentration camps.”

The call for boycott came after “Do The Right Thing” director Spike Lee said he considered the new movie insulting.

“American Slavery Was Not A Sergio Leone Spaghetti Western. It Was A Holocaust. My Ancestors Are Slaves. Stolen From Africa. I Will Honor Them,” he wrote on Twitter ahead of the film’s Christmas release.

Speaking in Berlin on Tuesday, Tarantino defended his latest work saying the brutal abuse he portrayed pales in comparison to what slaves actually endured.

“The truth, or the reality, was a thousand times worse than what I showed,” he told reporters ahead of the film’s launch in Germany.

His “Django” is a modern mash-up that borrows heavily from the spaghetti western and blaxploitation genres, critics say.

Foxx plays a slave-turned-bounty hunter who sets out to rescue his wife from a venal Mississippi plantation owner, played by DiCaprio.

Many have compared it to “Inglorious Bastards,” which was highly controversial as well. That movie garnered eight Oscar nominations.