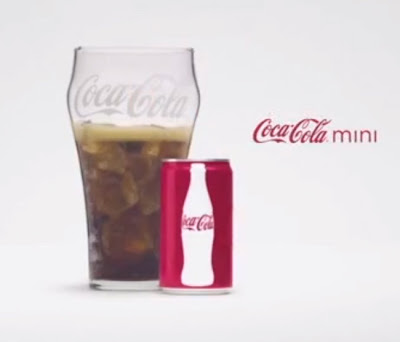 The Coca-Cola Company began a new television ad campaign Monday aimed at getting on the healthy side of the national debate over obesity — a novel step for a company built on sugary soft drinks.

“We’d like people to come together on something that concerns all of us, obesity,” began the two-minute ad, which is scheduled to run during prime-time cable news shows. “The long-term health of our families and our country is at stake, and as the nation’s leading beverage company, we can play an important role.”

The ad goes on to promote steps Coke has taken, like putting calorie counts on “the front” of its cans and other packaging and increasing the number of its brands sold in smaller cans, to help consumers make healthier choices.

“There’s a really important conversation going on out there about obesity, and we want to be a part of it because our consumer is telling us they want us to be a part of it,” said Stuart Kronauge, general manager for sparkling beverages at Coca-Cola North America.

This ad is aimed at policy makers, but a second ad, to be broadcast Wednesday during the first episode of the new season for “American Idol,” will focus on consumers, emphasizing the calories in a can of soda and offering ideas about how to work them off, like walking the dog for 25 minutes, doing a victory dance or even laughing.

The ads establish a link between the company and its products and obesity, which could be risky. “We thought about that, but we’ve learned that consumers love more information from us — and we really believe Coke has the power to connect people in a way that can help solve issues,” Ms. Kronauge said.

It is the first time the company has gone on the offensive to tackle widespread criticism that sugary sodas are one of the biggest contributors to the obesity epidemic, and the ads drew criticism even before they were shown.

“This is not about changing the products but about confusing the public,” said Michele R. Simon, a public health lawyer who writes frequently about the food and beverage business and its role in public health issues on her blog, Appetite for Profit. “They are downplaying the serious health effects of drinking too much soda and making it sound like balancing soda consumption with exercise is the only issue, when there are plenty of other reasons not to consume too much of these kinds of products.”

Ms. Simon dismissed the ads as pure public relations and noted that the industry faced an onslaught of public health efforts to curb consumption of sugary sodas, like efforts around the country to impose taxes on high-sugar drinks and Mayor Michael Bloomberg’s move to restrict the sizes of sodas sold in movie theaters and other spots in New York City.

The American Beverage Association, the organization that represents the industry, has filed a lawsuit against New York City and has fought successfully so far to defeat soda tax initiatives. Sales of carbonated sodas in general and sugary sodas in particular continue to slide, however, as consumers choose water, juices and other alternatives.

“They are clearly running scared and for good reason,” said Harold Goldstein, executive director of the California Center for Public Health Advocacy, which led the charge to get sugary sodas out of schools.

Dr. Goldstein said that if Coke really wanted to do something to reduce consumption of sugary sodas, it would sell them for a higher price than its other low- and no-calorie beverages. “Instead of spending millions on a P.R. campaign that will do nothing to combat obesity, diabetes and tooth decay, they would reap profits and change the beverage consumption of Americans in a big and beneficial way,” he said.

John Sicher, publisher of Beverage Digest and a longtime observer of the industry, said he thought soda companies had for too long avoided the issue of obesity as criticism mounted. “Letting the industry’s adversaries define it isn’t smart or in its self-interest,” he said.