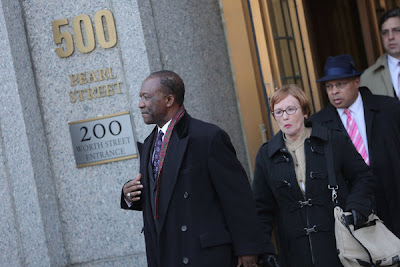 Ex-Lawmaker Gets 5 Years in Corruption

Larry B. Seabrook, a pillar of Bronx politics whose nearly three-decade tenure included stints as an assemblyman, state senator and city councilman, was sentenced to five years in prison in a corruption case on Tuesday by a federal judge who said he had betrayed the public trust.

Mr. Seabrook automatically lost his City Council seat in July after he was convicted of orchestrating a broad scheme to funnel hundreds of thousands of dollars in city money to friends, relatives and a girlfriend through a network of nonprofit groups he controlled.

His lawyers had asked that he not be sent to prison, citing his years of public service and what they called his immense shame and his potential for rehabilitation.

But the judge, Deborah A. Batts of Federal District Court in Manhattan, said that while she did not doubt Mr. Seabrook’s contributions as an elected official, the evidence had “clearly established that his qualities and accomplishments as a public servant are vastly diminished because of his sense of entitlement, arrogance, nepotism and greed.

“Instead of holding himself to a higher fiduciary standard as a councilman,” Judge Batts continued, Mr. Seabrook had “held himself above the law” and “betrayed the public trust by using his office to enrich himself and others.”

Mr. Seabrook was given until March 8 to surrender.

In speaking briefly to the judge before she imposed the sentence, Mr. Seabrook appeared to blame others for his predicament, much as his lawyers had sought to do during his trial last year.

He said that some of the people to whom he had given opportunities “did not do what they were supposed to do.”

“And I guess I will take the responsibility of that which they did,” he said, “but I know that the level of criminality that they might have done certainly was not a part of me.”

A prosecutor, Karl Metzner, responded briefly, telling Judge Batts that the jury had not found “that someone else was responsible for these frauds.”

“They found that Larry Seabrook was responsible for these frauds,” he said.

They had contended that Mr. Seabrook, a Democrat who as a councilman represented communities like Co-op City, Williamsbridge and Baychester, had created programs to help Bronx residents, but had been betrayed by people he had brought in to run the groups, who stole money without his knowledge.

Mr. Seabrook’s first trial ended in a mistrial in December 2011 after a jury said that it could not reach a verdict. In a retrial, which lasted just over a month, he was convicted on 9 of 12 counts, including mail and wire fraud.

Prosecutors said, for example, that Mr. Seabrook had appointed his girlfriend, Gloria Jones-Grant, executive director of the nonprofit groups, even though he knew she was unqualified.

Ms. Jones-Grant received more than $300,000 in city money from those positions and consulting, the government said.

The judge noted that Mr. Seabrook’s lawyers had argued “that there should be some adjustment to the amount” of money considered lost through the frauds “for work actually performed on the contracts awarded” to Mr. Seabrook’s nonprofit groups.

But, the judge added, “The trial record is devoid of evidence of work actually performed.”

After Mr. Seabrook’s conviction last summer, Rose Gill Hearn, the commissioner of the Department of Investigation, which had opened the inquiry into him, called him “a master of diversion and misdirection.”

Preet Bharara, the United States attorney in Manhattan, whose office had sought a sentence of at least 7 ¼ years, said after the sentencing on Tuesday that Mr. Seabrook had been “a flagrant and serial abuser of City Council discretionary funds in a far-too-familiar New York tale of corruption.”

“We remain committed to making those who are corrupted by power pay the price,” Mr. Bharara added, “and the public can expect more arrests of politicians who have not learned this lesson.”

Mr. Seabrook declined to comment after the proceeding. His City Council seat has been filled by Andy King Jr., a community activist elected in November.