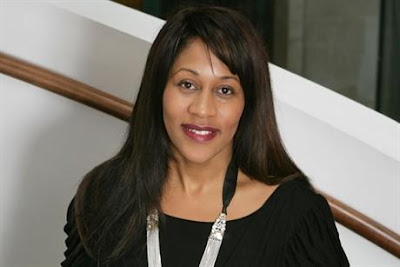 Campaign published a piece spotlighting “Women of Tomorrow” and actually managed to find a Black woman in the U.K. advertising and marketing industry. According to the article:

The IPA has joined forces with Campaign to identify ten ‘Women of Tomorrow’ — female leaders who are likely to shape the future. Interested parties can enter the competition via the IPA website www.ipa.co.uk/page/women-of-tomorrow-competition) before 31 January. Here, Campaign highlights the achievement of ten women in adland who have blazed a trail for those who follow.

Blackett is the chief executive of the UK’s largest media agency — a business that seems to be overflowing with gifted women (the chief strategy officer, Sue Unerman, and the managing director, Claudine Collins, are also key players there). Blackett’s constant focus on finding and then nurturing talent is a massive factor in MediaCom’s success, so much so that, in November last year, she was named the UK’s seventh-most-influential black person by Powerlist, in part for launching an apprentice scheme aimed at non-graduates from less affluent backgrounds. That scheme also led the National Apprenticeship Service to choose Blackett to voice a recent radio ad.

Her rise from humble origins in Reading serves as her inspiration to encourage others. As she said in a recent Campaign column: “My race and my background haven’t prohibited my development. However, throughout my career, I have struggled to understand why there weren’t more people like me in the industry.”

Agencies want to stand out, but they all look the same

My dad always told me to “celebrate my differences”.

It was good advice. We’re not all the same. Nor should we want to be. Especially in an industry like ours, where it’s vital that we understand differences.

Our role as a communication agency is to help our clients change consumer behaviour, change brand perceptions, sell more products. Our clients’ brands and their campaigns have differing and varied target audiences. We need to understand all of those different audiences. We need to be able to walk in the shoes of all of our clients’ consumers. Hard to do if you’re only used to wearing Louboutins or Church’s brogues.

So surely we need to recruit and train talented, ambitious people into the industry who can build empathy with consumers from all walks of life. Shouldn’t our industry make-up reflect the society that we live in?

I grew up in a working-class family in Reading. My dad was a plumber, my mum was a nurse and they were first-generation immigrants to the UK from the West Indies. I started in the media industry in 1993. I joined during a recession when agencies were barely employing graduates, let alone those without any industry connections. It was tough to get in. I have been lucky to have a number of mentors who saw my potential and helped me to carve out a varied career. My race and my background haven’t prohibited my development. However, throughout my career, I have struggled to understand why there weren’t more people like me in the industry.

With the average tuition fees for a university degree course tripling in the past two years to £9,000 per annum, thousands of school-leavers are deciding university is too rich a concept for them. We are clearly missing out on a pool of talent if we only recruit graduates — especially if this is further narrowed to those from “Ivy League” universities or those with renowned media studies courses.

The UK’s black and ethnic-minority population now accounts for 12 per cent of the UK. The IPA’s Multicultural Britain report claims that, by 2051, England and Wales will be as diverse as London is now.

Encouraging diversity of all kinds in our industry is essential to our continued success. I launched an apprenticeship programme at MediaCom this year to do just that. We advertised it to a number of local authorities as well as academically strong schools that have a higher-than-average rate of free school meals (one of the main indicators of household poverty). We hope it will give real talent a chance to develop and shine, build a fantastic career and, as a by-product, future-proof my business and my agency’s growth.

My dad was right. I think more agencies and media owners need to take his mantra to heart.

Karen Blackett is the chief executive of MediaCom UK

Great article Karen, I think employers are slowly starting to realise the untapped potential in the graduate job market. I think they still have a lot to learn about keeping them motivated though, they might be prepared to work hard for minimum wage but unless there's some reward system in place, they're just not going to stick it out. I read an article on the Best Practice Hub blog which noted that unless they feel like a valued team member, they're likely to thank you for the experience you've given them and use their ambition to find something else where. Speaking from experience, I encourage all employers to really appreciate their graduate workers and realise their future potential.