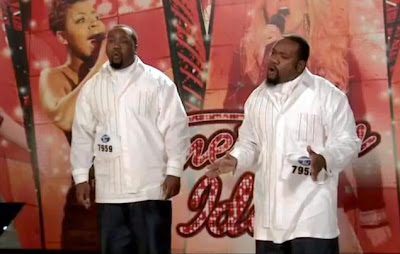 ‘Idol’ executive producer Nigel Lythgoe called the allegations ‘ridiculous.’ ‘We treat everybody the same … no matter the race, religion or sex,’ he said.

The hit talent show “American Idol” has been waging an off-key campaign to boost ratings by playing the race card, a New York lawyer claims.

The attorney, James Freeman, said the show has been juicing-up the drama by publically revealing that some black contestants have arrest records — and then using that as an excuse to boot them off the show.

Freeman said he has submitted a letter to the federal Equal Employment Opportunity Commission asking for permission to sue the show on behalf of nine humiliated African-American contestants — all of them male.

But Freeman declined to release a copy when contacted by The Daily News - and said he could not explain how the celebrity website TMZ.com got the letter.

“I don’t know how they got it, but they got it,” Freeman said Friday. “I’m not trying to litigate these claims through the press.”

There was no immediate response from FOX Broadcasting to the potential suit, but “Idol” Executive Producer Nigel Lythgoe called the allegations “ridiculous.”

“We treat everybody the same … no matter the race, religion or sex,” he told TMZ.com. “I think we’ve always had a fantastic share of talent from contestants both black and white … I don’t think I’ve ever seen racism at the show.”

Also, longtime judge Randy Jackson is black. As is one of his fellow judges on the panel, Nicki Minaj.

But Freeman isn’t the first to accuse the show of humiliating black singers to boost ratings.

Last March, when Jermaine Jones was kicked off Season 11 for failing to tell the producers about outstanding warrants out for his arrest, some critics claimed the show staged the disqualification.

Jones, who is not one of Freeman’s Idol Nine, declined to address the issue. “I haven’t even taken my mind into that and why they did what they did, because then I’ll drive myself crazy,” he said.

Freeman said Jones’ plight prompted him to look for other cases and he found nine other cases.

In his letter, Freeman said the “cruel and inhumane” scheme works like this: Producers ask contestants if they have ever been arrested. Then they sic private eyes on those who admit they have — and use the info to paint them as “violent criminals, liars and sexual deviants.”

Freeman insisted none of the singers were convicted when they got booted, “yet their personal and professional lives remain permanently and severely impaired.”

One of Clark’s clients is Corey Clark, who got axed from Season 2 after producers learned he was busted for beating his sister. He later pleaded guilty to “obstructing legal process.”

“He doesn’t have any comment,” said a woman at Clark’s home outside of Nashville.

Golightly, however, was disqualified after the producers learned he was already under contract with a boy band. And it was not clear why Joyner was part of the group because he never advanced beyond the semifinals.