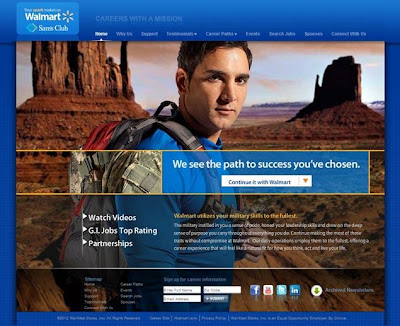 Walmart pledges a job to every honorably discharged veteran

The plan was met with approval by First Lady Michelle Obama and recruiters who place vets in jobs. But former Walmart employees think the minimum wage, part-time work won't help vets get on their feet.

Retail giant Walmart pledged Tuesday to hire any returning military veteran that wants a job with the company.

Walmart U.S. CEO Bill Simon told a retail conference in New York City the company expects to hire 100,000 veterans over the next five years, one of the largest-ever hiring commitments of former military personnel.

“We believe Walmart is already the largest private employer of veterans in the country, and we want to hire more,” Simon said. “Hiring a veteran can be one of the best decisions any of us can make…Veterans have a record of performance under pressure. They’re quick leaders and they're team players.”

Starting Memorial Day, Walmart will offer a position to any honorably discharged veteran in his or her first 12 months off of active duty. Most of these jobs will be in Walmart stores and Sam’s Clubs, and some will be in distribution centers or the home office.

The announcement was met enthusiastically by employment agencies that place veterans in jobs.

“We’re ecstatic,” said Ron Rutherford, business development manager at the career site TAonline. “The commitment is like an open hand willing to assist any veteran who wants to work.”

The plan has also gotten a warm reception in Washington, where first lady Michelle Obama said it “a groundbreaking example for the private sector to follow.”

But Walmart’s deep roster of critics say the jobs will do little to help returning military members get on their feet financially. “The jobs will be part time, 28 hours a week” said Bronx resident and Army veteran Edgar Lucas.

Lucas, who worked for a Walmart in Kentucky, called the plan a “scheme.”

“Anything that’s not 40 hours, I don’t know how it’s going to help these veterans,” he said.

A group of protesters lined up outside the Javits Center in Manhattan Tuesday as Simon gave his speech, accusing the nation’s largest private employer of unfair work practices and of keeping employees short of 40 hour work weeks to avoid paying benefits.

“Walmart is the driving force that fuels underemployment in the county,” said Yana Walton, a spokeswoman for the advocacy group the Retail Action Project. “These aren’t the kinds of jobs for folks returning home, or for Americans,” she said.

The hiring push could generate millions in tax breaks for Walmart — employers can get tax credits of as much as $9,600 for hiring a veteran, depending on certain criteria, under a U.S. tax provision extended through 2013.

Walmart’s announcement Tuesday also included a pledge to spend an additional $50 billion on U.S.-made products over the next 10 years.

“I know according to urban legend Walmart’s shelves are filled with foreign products,” Simon said. "But the truth may surprise you.”