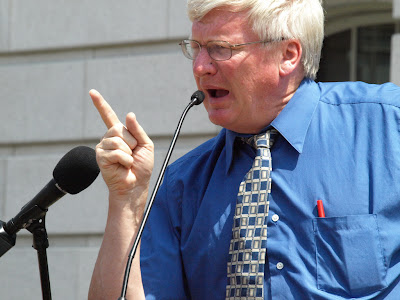 A quarrel with Kwanzaa

Reports of a so-called war against Christmas may be wildly exaggerated, but at least one Wisconsin lawmaker really is waging a war against Kwanzaa.

In a war by news release, Wisconsin Republican state Sen. Glenn Grothman of West Bend fired this recent blast: “Why are hard-core left wingers still trying to talk about Kwanzaa — the supposed African-American holiday celebration between Christmas and New Year’s?”

“Hard-core left wingers?” Surely he is not talking about greeting card companies, fast-food chains or the U.S. Postal Service, among others who have capitalized on Kwanzaa in recent years. Surely he doesn’t mean presidents like George W. Bush who, with first lady Laura Bush, annually praised Kwanzaa’s “focus on the importance of family, community and history, and to reflect on the Nguzo Saba or seven principles of African culture.”

Those seven principles, as President Bush noted, are “unity, self-determination, collective work and responsibility, cooperative economics, purpose, creativity and faith.” If people hear something sinister in that list, I think they have the problem, not Kwanzaa.

Yet, Grothman assures us that he has only the best interests of African-Americans in mind. After all, he says, “almost no black people today care about Kwanzaa — just white left-wingers who try to shove this down black people’s throats in an effort to divide Americans.”

Unfortunately the only person I hear in those passages who is trying to divide America is Grothman. He’s not alone among conservatives who denounce Kwanzaa, he’s just one of the more prominent.

I could ignore his ravings more easily if they did not feed an unfortunate narrative of “blackophobia,” defined in the online Urban Dictionary as “an exaggerated fear of black people” and black culture. At a time when Republicans are struggling nationally to expand the party’s appeal beyond its mostly non-Hispanic white base, Grothman is not helpful.

He ended his Kwanzaa release, which he also emailed to his constituents, by cautioning parents to “be on the lookout if a K-12 or college teacher tries to tell your children or grandchildren it’s a real holiday.”

His remarks were predictably denounced, especially by Democrats. But I’m not mad at him. If Kwanzaa, a product of the 1960s black consciousness revolution, really is on the wane, nothing will help to re-energize it more than attacks from clueless culture warriors.

Let’s get a few things straight: Like it or not, Kwanzaa is all about inclusion, not division. “Kwanzaa is clearly an African holiday created for African peoples,” says the Official Kwanzaa Website. “But other people can and do celebrate it, just like other people participate in Cinco de Mayo celebrations besides Mexicans; Chinese New Year festivities besides Chinese; Native American powwows besides Native Americans.”

Kwanzaa was created in 1966 by Maulana Karenga, born Ronald McKinley Everett, now an Africana Studies professor at California State University at Long Beach, to be the first pan-African holiday. His goal was to give black Americans, stripped by slavery of our ancestral traditions, an Africa-centered alternative to the existing mainstream holidays — without trying to replace them.

Unfortunately, Karenga had a hard time upholding his own lofty seven principles. He served prison time in the early 1970s for felonious assault and false imprisonment connected to his radical organization. U.S. congressional investigations later found that J. Edgar Hoover’s FBI had provoked violent conflicts between the U.S. and the Black Panthers. Yet, Kwanzaa’s good reputation has outlasted that of its founder.

As one who remembers those turbulent 1960s, I think Kwanzaa serves as an important spiritual and familial need for African-Americans as we re-examine ourselves through the lens that W.E.B. DuBois called the “double consciousness” of being African and American.

My family and I celebrated the lighting of a menorah-like Kwanzaa kinara annually with family, friends and neighbors of all races and creeds. The tradition has faded somewhat as our son has grown up. Kwanzaa, like Santa Claus, just isn’t the same without kids.

But I’m willing to bring back our family festival if Sen. Grothman is in town and would like to join us for a real Kwanzaa experience. He would be welcome. Kwanzaa’s first principle is “unity.” We don’t have to be uniform.