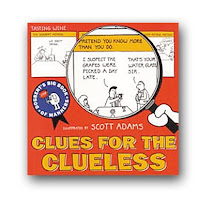 Answer: Why do certain individuals view President Barack Obama as some form of reparations—as if his election pays off the bar tab of bias Madison Avenue has amassed over the years?