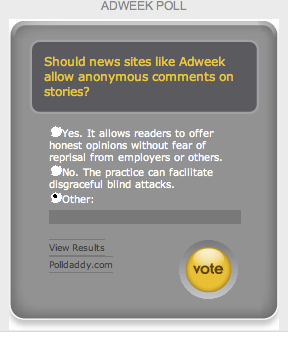 After a recent story resulted in 200+ comments—many ripping two New York ECDs—the publication presented the poll above. Adweek followed through with a lame editorial, announcing they will be more diligent in moderating comments.

What planet are these fools from?

For starters, it’s their responsibility to moderate online remarks. Advertising Age is quite explicit in stating that comments personally attacking people will be deleted. Not sure why Adweek didn’t create a similar position sooner.

One Adweek editor claimed they did indeed remove select comments, “like ones that referred to Paul Tilley (a Chicago ECD who committed suicide last year).” Um, it’s swell to show respect for the deceased—but what about the living? Why is it obscene to mention a dead person, but OK to shit on people who are still alive?

Certain folks noted commentators referred to Adweek.com as a blog. Well, if you’re going to let all hell break loose via threads, the confusion is understandable. Additionally, Adweek’s own blog, AdFreak, is hardly a stranger to rude comments. That blog, some might recall, initiated the hate fest for Draftfcb by being the first to snicker at the infamous “Cannes Fucking Lions” ad. And now Adweek regularly reruns content from AdFreak in the magazine and at Adweek.com.

Seems like Adweek wants to have its cake and crass comments too.
Posted by HighJive at 12:25 AM