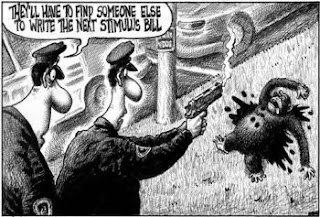 • The New York Post sparked controversy by publishing the cartoon above, which some believe demeans President Barack Obama. Rev. Al Sharpton said, “The cartoon in today’s New York Post is troubling at best given the historic racist attacks of African-Americans as being synonymous with monkeys. One has to question whether the cartoonist is making a less than casual reference to this when in the cartoon they have police saying after shooting a chimpanzee that ‘Now they will have to find someone else to write the stimulus bill.’ Being that the stimulus bill has been the first legislative victory of President Barack Obama and has become synonymous with him it is not a reach to wonder are they inferring that a monkey wrote the last bill?” The Post fired back, “The cartoon is a clear parody of a current news event, to wit the shooting of a violent chimpanzee in Connecticut. It broadly mocks Washington’s efforts to revive the economy. Again, Al Sharpton reveals himself as nothing more than a publicity opportunist.” Um, the New York Post should not accuse others of being publicity opportunists.

• Goodyear reported 4Q sales flattened 21 percent, prompting the decision to cut 5,000 jobs. At least they didn’t blame it on a raging chimpanzee.

• Michael Jackson is poised to auction off thousands of personal items, including his iconic white glove. When Bubbles finds out, he’s gonna go ape-shit.
Posted by HighJive at 8:16 PM

That cartoon was stunningly tone-deaf by any standard. I expect the Post to behave badly, but even this is beneath them. Or it should damn well have been.

That was/is some bullsh*t! Hatred. The kind I pretend to be eroding away. I imagine this kind of ignorance is hidden in the backwoods, maybe sleeping with animals. But damn, it's alive and sh*ttin' in the most "cosmopolitan" city in the world. WTMF!