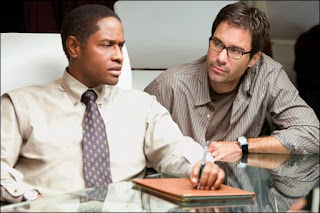 The latest episode of TNT series Trust Me momentarily spotlighted Account Director Gordon, the only Black person in the fictional RGM agency. Seems Gordon opted to leave the shop, claiming he was “pursuing other opportunities.”

When Gordon announced his departure, inviting Mason and Conner to join him for a slice of farewell cake, Conner quipped, “Chocolate?” Conner waited for Gordon to exit before muttering in paranoia, insisting the comment was not racial.

Later, as the rest of Mason’s team learned of Gordon’s decision, one of the Young Turks joked about “the last bastion for diversity.”

In another subplot, Mason and Conner went on a commercial shoot in L.A. The two finished a spot without client or agency approval. Or a pre-pro meeting. Or a final casting session. Or a tech scout. Or a producer. Yet what was the most unbelievable part in the scenario? They filmed with a Black director.

But wait, things get even more unbelievable. It was ultimately revealed that Gordon took a job with Leo Burnett. Note the next-to-last paragraph in an earlier post on Trust Me.
Posted by HighJive at 10:21 PM