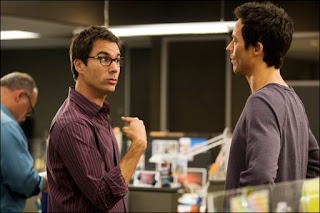 Didn’t watch the entire latest episode of TNT series Trust Me, but saw enough to continue the contention that the show’s creators are culturally clueless White men. Indeed, they are most likely AWMs.

The program is a tad too comfortable presenting a White male viewpoint, with all the paranoia and silliness usually associated with a standard midlife crisis.

This week, audiences were treated to Mason and Conner facing ageism.

These poor, pathetic victims felt threatened for being considered outdated and irrelevant. The truth is, they are. The allegedly creative duo consistently freestyles in client meetings, admittedly pulling ideas out of their asses. Are they the only ones who don’t realize such acts result in, well, shit? If you are seeking to position yourself as a youth expert after conducting an in-home focus group on your teenage daughter, you deserve to get called out. Instead, Trust Me paints these assholes as heroes who merit pity. Mason and Conner are whiny bitches who feel entitled, despite having failed to demonstrate they’ve ever earned their positions.

Leave it to White admen to devise such perspectives and pass it off as entertainment.
Posted by HighJive at 10:13 PM

Ha! Nailed it. So on point with what this show is all about. whiny ass baby pap. I still try and watch. it beats nitol for knocking me out. Haven't seen an entire episode yet. These losers make for great snoozers.