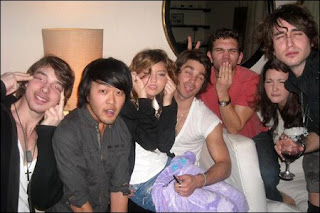 • Miley Cyrus is still reeling over her insensitive photo that offended lots of Asians and Asian Americans. Advocacy groups are blasting the Hannah Montana star, demanding that she produce public service announcements to help fight discrimination and counter perpetuating stereotypes. It doesn’t help that Cyrus is most famous for playing a character who likes to don a blond wig, huh?

• Marijuana enthusiasts are blasting Kellogg for its decision to dump Olympic swimmer Michael Phelps after he was caught with a pot pipe. “Kellogg’s had no problem signing up Phelps when he had a conviction for drunk driving, an illegal act that could actually have killed someone,” said the protesting group’s executive director. “To drop him for choosing to relax with a substance that’s safer than beer is an outrage, and it sends a dangerous message to young people.” Guess there’s no need to wonder what this moron’s been smoking.

• United Airlines is overhauling its customer service, dumping call centers and forcing fliers to lodge complaints via email or postal mail. Additionally, the company will probably charge customers a $50 fee for any complaint letter over 15 words.
Posted by HighJive at 6:19 PM