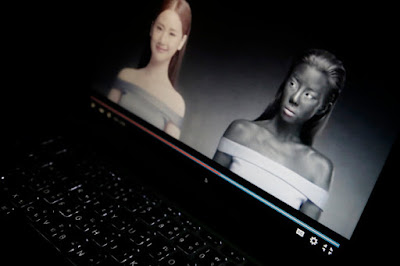 A Thai beauty company that sells skin-whitening products pulled a recent video advertisement after viewers were offended that the ad showed an actress in blackface and compared her unfavorably to a light-skinned woman.

The ad was for Snowz, a skin-whitening pill manufactured by the company Seoul Secret. Viewers were incensed that Cris Horwang, a Thai actress, appeared in blackface. Viewers also took offense at other parts of the video, especially the slogan “You just need to be white to win,” Reuters reported.

On Friday, Seoul Secret published an apology on Facebook and said that the company was pulling the video and all related advertisements.

“Our company did not have any intention to convey discriminatory or racist messages,” the statement read. “What we intended to convey was that self-improvement in terms of personality, appearance, skills, and professionality is crucial.”

The Asia-Pacific region is the largest market in the world for skin lighteners, and the global market for such products is projected to become a business worth $23 billion by 2020, according to a 2015 report by Global Industry Analysts, Inc., a market research firm. For years, companies have aggressively marketed whiteness as the de facto beauty standard in Asian cultures. Words like “radiance” and “perfect” have been used by Olay and L’Oréal to sell to Asian markets.

Ads for products including supplements, drinks and creams can come with blunt and even invasive messaging: A 2012 ad promised that a product would make women’s intimate areas “bright and translucent.”

But Thai companies in particular have been criticized for ridiculing woman and young girls who have dark skin. In Thai culture, dark skin is associated with farmers, a lower-status group of people who have been darkened by the sun. White skin signifies a higher class and beauty standard. The craze for a lighter complexion has caused women to resort to unregulated and illegal products that promise a brighter tone but damage their skin.

In recent years, Thai advertisements have been criticized for being overtly racist. In 2013, the Thai company Vernena was accused of mocking people of African descent for an ad that featured a woman who used a berry drink to change her appearance from dark- to light-skinned. The ad showed an evolution from her old self compared with the African appearance and accent of a man who appears to be her father.

That same year, Citra Thailand, a subsidiary of Unilever, apologized after it offered “scholarship” cash prizes to college students who used a product to lighten their skin, according to The Chiang Rai Times, a Thai newspaper. In the past, the company had published ads that showed a young girl finding acceptance after using a whitening lotion.

On Friday, people on social media continued to debate Seoul Secrets’ apology for its contribution to marketing misstep history.

Others were not convinced the company had done anything wrong.

“I do not see a problem with your video,” another person wrote. “If people do not like skin whitening, just don’t do it.”

The only thing shocking about this is how blatant the racism is in Thailand. Working in American advertising, agencies and brands usually keep it on the quiet side before it ever gets to print or screen.

Want some actual casting phrases? They’re code words to hide the real racism of course, but everyone knows what they mean:

“Urban look” = black, but not too black. Mixed preferred.

“Mediterranean look” = vaguely olive skinned or light skinned with dark hair, can pass for Latino, so we can sell this ad in America and overseas and save money. But no Asians. Definitely nobody black.

Blatant, but not surprising.

Messaging like this is just better hidden in American advertising.

I wonder if the Thai ad agency did this on purpose, though. Cynical, I know.