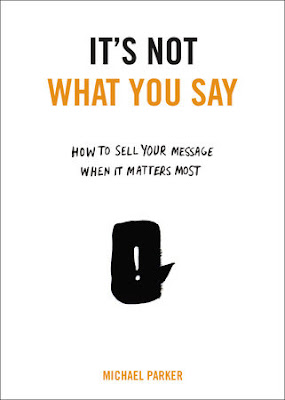 It’s Not What You Say: How To Sell Your Message When It Matters Most by former Saatchi & Saatchi London Vice Chairman Michael Parker is like most of the work from Saatchi & Saatchi. That is, it’s a solid concept and decent execution, but nothing overly unique or breakthrough. Parker provides his presentation ponderings with plenty of alliteration—Principles, Preparation, Pitch, Performance and Perfect.

But what makes Parker so annoying are his references to Martin Luther King Jr., Nelson Mandela, Maya Angelou and Desmond Tutu:

Parker wrote, “Martin Luther King Jr.’s speeches were eloquent enough in their written form, but inspiration leaps when we hear and see his performance of his famous ‘I have a dream’ speech—the words become spine tingling.” Yes, but not persuasive enough for White advertising agencies to embrace the dream.

Parker observed, “Nelson Mandela cultivated his likable image through every aspect of his appearance, not least his beatific smile.” Yes, and when minorities ask for a fair shake in adland, White advertising executives wink and smile.

Parker added the Archbishop Desmond Tutu quote that reads, “Don’t raise your voice. Improve your argument.” Yes, but White advertising executives have not improved their argument to explain the dearth of diversity.

I have eaten, talked and walked with Nelson Mandela and Bishop Desmond Tutu.
See photo: http://www.adonishoffmanlaw.com/about.html

Saatchi & Saatchi is no Mandela or Tutu.

It sounds like the Vice Chairman took the agency world's usual "Total Market" approach to diversity.

That's where a large white agency uses black culture to sell something (in this case a book, using Nelson Mandela and Bishop Tutu's words) without ever using or hiring anyone black in a meaningful way.

This Total Market B.S. is so common in his line of business that he probably didn't bat an eye doing it.