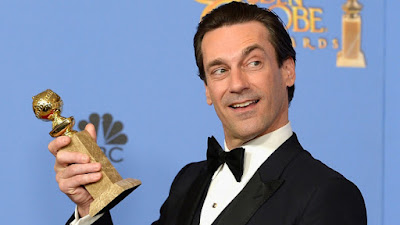 Adweek reported Jon Hamm won a Golden Globe for best actor for his portrayal of Don Draper on AMC series Mad Men. The Black actors in the show were shut out from contention by being grossly underrepresented in the final season. As always, Mad Men perfectly reflected the modern advertising industry. Somebody give Hamm an ADCOLOR® Award too.

Mad Men might be done, but there are still a few more awards for the show—and star Jon Hamm—to add to its tally.

Tonight, Hamm won a Golden Globe for best actor in a drama, continuing the awards streak for his long run as Don Draper after taking home his first Emmy in September after being nominated seven previous times.

It was the second Globe that Hamm has won for the role, but it was the first time his win was televised. When Hamm took home his first Globe in 2008 for the show’s first season, there was no awards telecast because of the Writers Guild strike, which in essence shut down Hollywood for 100 days.

Finally getting to take the stage in front of a worldwide audience, Hamm thanked Mad Men creator Matt Weiner, “who wrote this horrible person all the way through to the end of the ride, and for picking me to play him.”

And, referencing the show’s already-iconic finale, Hamm jokingly added: “And thanks for not taking my suggestion and ending the entire series on Chumbawamba. You picked the right song.”

All told, Mad Men won five Golden Globes over its seven seasons—three awards for best drama and two for Hamm as best actor in a drama.

Speaking with reporters backstage, Hamm said he is still figuring out his post-Mad Men career plans.

Aside from Hamm’s win, the television-related picks were all over the map, which is typical for the eclectic and somewhat mysterious voting body.

The best musical/comedy award again went to Amazon, but for Mozart in the Jungle, not Transparent, which won last year. Mozart’s Gael Garcia Bernal won for best actor in a comedy or musical, beating Transparent’s Jeffrey Tambor.

And in a classic Golden Globes oddity, Lady Gaga won a best actress award for her role as the Countess on American Horror Story: Hotel.