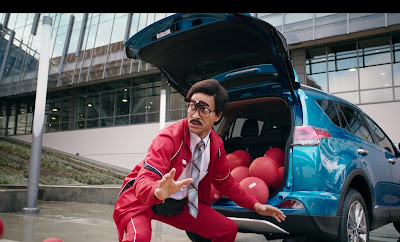 Um, look at the credits. The agency's black but most everyone else calling the shots is white.

This was a recipe for disaster. Toyota saves all the big bucks for their white ad agencies and teams, then gives a fraction of time, money and attention to their black agency.

Which turns around and is black on the surface but only ever hires / uses / relies on / listens to mostly white voices.

So something like this obviously fails, and then everyone black gets the blame. So brands never want to give a full amount of money to a black agency.

Oh, HELL no!
Burrell does NOT get a pass on this garbage—not anymore.

Burrell has been trying to set back the clock to early 1980's with this dated approach and their Huxtable-like comedy for years now, and its got to stop. Stop making things worse for a new generation of black people. It's embarrassing us. Look at it; there's no marketing insight from a unique African-American cultural experience whatsoever, is there? It's a car dealership sales pitch trying to be funny. That's it. The art direction is cluttered, the wardrobe is cheap, the script is too long, and the acting is just ridiculous. What is there to like?

It's the same kind of low-brow, intelligence-insulting, sexually-objectifying, stereotype-reinforcing, minstrel show buffoonery we criticize white agencies for producing all the time. It's simply not funny, not well done, and not anything new. Wait, I take that back; it is a new low for Burrell. At one time, Burrell had standards. And unfortunately for anyone who once admired the organization, it's sad to see work created by that venerable name that willfully helps set African-American imagery in the media back generations.

Before we give in to bashing "the man" again, we should be asking Lewis, Lisa and everyone else dubiously credited as "creative leadership" in the house that Tom built, "Why couldn't you come up with ANYTHING better than this?" (Seriously, who was this supposed to appeal to—and please don't say the urban youth millennial market?) If these roles stay the same, I honestly have to question the agency's value and contribution to the next generation of minority creative talent when they can care so little about originality, integrity, pride, and even culturally-conscious sensitivity. No one at Burrell should have let this hot mess out the door whether they are black, white or otherwise. There's just no excuse.

Why would Burrell sink money into a production? Everybody knows that's where a minority ad agency makes up all the $$$$ to stay afloat.

You hire an expensive white director who charges full price, but cheap out on the wardrobe, the actors, the everything else, and you (the minority ad agency) pockets the difference.

Then you can keep your doors open a few more months.

Harsh, but it's real life.